Benoît Maubrey (born 1952 in Washington, D.C. of French parents) is visual and sound artist. He graduated in 1975 with bachelor of Arts degree from Georgetown University. Since 1979 lives in Berlin. since 1990 in Baitz (Brandenburg) and in Berlin. Co-founder of the non-profits arts organization Kunstpflug e.V, Baitz. The director and founder of DIE AUDIO GRUPPE - a Berlin-based art group that build and perform with electronic clothes, equipped with amplifiers and loudspeakers that make sounds by interacting thematically and acoustically with their environment. In his non-mobile sculptural work he frequently uses former public (disguarded) monuments and recycles them using modern technology and electronics.

Recycled and “found” electronics as his artistic medium. Since 1982 he has been conceiving and creating interactive sculptures in public spaces. In most cases the sculptures interact with their environment: quite often they function as “Speakers Corner” where the public can express themselves “live”.

Artist’s Statement: PHONIC BODIES and CHOREOGRAPHED SOUNDS
"My decision in the early 1980s to stop working with pigments and canvas came from a desire to interact directly with public spaces. By building loudspeakers into clothes I could intervene in any given environment in a temporary and cost-efficient way: loudspeakers and circuit boards are cheap and can be salvaged from surplus electronics and disguarded toys. My artistic tools are electroacoustic clothes: costumes and suits that are equipped with loudspeakers and amplifying systems that allow the individual wearers to react acoustically to their environment. Basically each person wears one part of a composition: the position of the individual “audio actors” and their movement (their “orchestration”) within a space produces the final composition. At the same time I develop this concept thematically by adapting the “clothes” to particular sites, cultures and regions. In all of this work I use electronics as a modern “clay” that I can form and create into fantasy-full performances and objects". 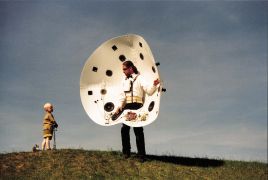 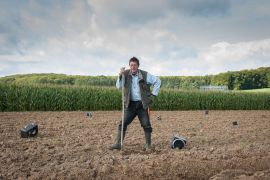