Medime Sovan Kumar: I. I am Time; II. Toilet Opera

I. I am Time
The Bhagadavat Gita is the book of poetic narrative to reveal the secrets of life and time, a gift from Lord Krishna to his disciples. It was the inspiration for my first installation for the „Fairy-Tales“ symposium, in which I gave my own interpretation of how time can be perceived, manipulated, and used wisely in our own lifetimes. I created an atmosphere of spirituality, with the door opening to the hand, blessing the world with the gift of time, yet the mood was lightened with a Westernized message for peace from Madonna´s song, „Shanti Shanti“. The sandals of paper show not only the presence of human beings, but also the need for humility and purification. All materials for the installation were found at the Monastery, to emphasize that this spiritual experience can exist within any setting.
II. Toilet Opera
Video installation, objects. Photographs
Prelature
The porcelain toilet representing the throne of private thoughts and memories in the western world provided the structure for the second part of my installation. My performance in Indian traditional costume was an advertisement for a Czech fairy tale opera, incorporating sequential memories and events that have occurred in my recent travels from China to the Czech Republic. The photos exhibited reveal the characters involved in my personal opera, depicted in forms of love, ghosts, humour and dreams. The coal signifies melting memories seeping towards the staircase of darkness. 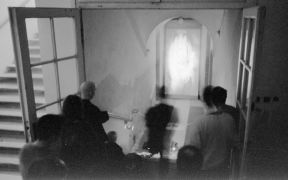 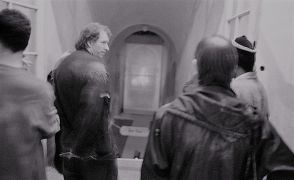 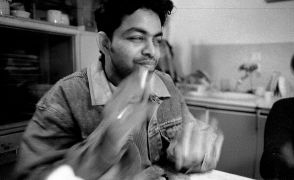