Feng-yün Song Vojtová (born in northeastern China) is a vocal teacher specializing in the influence of proper breathing and the use of voice on psychosomatic health. She is a lecturer of the workshop programme of a method called Voice Autotherapy.

Vojtová has been learning the traditional Beijing opera art since her childhood. From 1975 to 1983, she taught Beijing Opera to teacher Chuejmin Shang [unclear meaning], is a follower of the Shang family, one of the four major Chinese schools of Peikng opera of the female type, and at the same time, took part in various singing competitions and won numerous awards. Between 1983 and 1994 she did Czech studies at the Institute of Foreign Languages in Beijing and at the Faculty of Philosophy and Arts of Charles University in Prague, where she received a scientific degree. Since 1990 she has been living in Prague and has been working in the fields of Czech music and culture.

Since 1992, Vojtová has taught singing and movement at the Jaroslav Ježek State Conservatory and the Pure Joy Theatre Studio. She combines and uses ethnic voice techniques, and experiments together with European instrumentalists. She has performed in theatre, television and radio and she has had hundreds of concerts in Europe and China. Through many musical projects, she contributes to the intercultural dialogue between the East and the West.

Jan Gajdošík studied music and theater science in Brno at the Faculty of Arts, Masaryk University, specializing in keyboard instruments and synthesizers. He focused on rock music (in several musical groups), jazz and scenic music (for Slovácké and other theaters), as well as alternative music. He has been working with Song Vojtová since 1996. 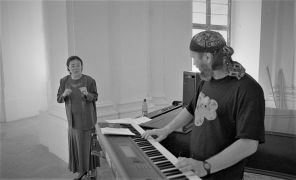