During my time in Plasy in 1999 I finished the book «Ο μανικουρίστας» . I am crediting the residency in the book itsef. Maniker

Christos Chrissopoulos (b. 1968, Athens) is a writer and photographer whose work has been exhibited internationally. He is interested in the narrative connections between literature and photography. The author lives in Athens. He studied economics in Greece and psychology in the United Kingdom. Since 2008, he has taught creative writing at the Greek National Book Center and at the universities of Athens and Thessaloniki. In addition, he was also a visiting instructor and an International Writers Program fellow at the University of Iowa.

Chrissopoulos has published fifteen books in various genres, including fiction, essays, chronicles, and photography. He is best known for his Athens Trilogy, which comprises the novels Periklistos Kosmos (Enclosed World, 2003), O Vomvistis tou Parthenona (2010; The Parthenon Bomber, 2017) and the chronicle Fakos sto Stoma (Flashlight between the Teeth, 2012). In The Parthenon Bomber, he engages with issues of the collective imagination and politics by placing a fictional act of terrorism at the center of the plot which is based on a real manifesto that was published in Greece at the end of World War II, titled Blow up the Acropolis! It was the call to action made in 1944 by the “Association of Aesthetic Saboteurs of Antiquities”, a group of Greek surrealists. Sixty years later, a young man carries out the act in an attempt to free himself and the Greeks from the inhibitory burden of their overpowering classical heritage. The Parthenon has been rendered into dust and ashes and the city orphaned. In his novel, Chrissopoulos reflects on history and art and on the national identity of Greece and its interplay with the idea of Europe as a distinct entity. “For two thousand years, Greece has inspired Europe with its philosophy, its literature, and its theater. But Greece is also a product of Europe. The Renaissance, idealism, and romanticism have breathed new life into it. So Europe has also played its part in the invention of Greece.”

In 2008, Chrissopoulos received the Academy of Athens Award for his novel I Londresiki Mera tis Laura Jackson (Laura Jackson’s London Day, 2008), which is about the fragile biography the poet, writer, and essayist Laura Riding Jackson (1901–1991). In 2015, the French Republic awarded him the title of Knight of the Order of Arts and Letters. He has also received the Balkanika Prize (2015) and the French Prix Laure Bataillon (2013) and Prix Ravachol (2013). Translations of Chrissopoulos’ works have been published in Germany, France, Italy, the USA, and elsewhere. He is a member of the Greek writers association and the European Cultural Parliament (ECP). He founded the Dasein Fest International Literary Festival in Athens and lectures frequently on literature, theory, and politics. 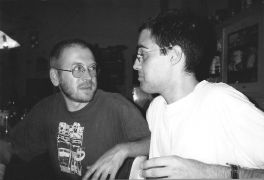