Residency realized in collaboration and support from Soros Center for Contemporary Art in Prague and Bucharest.

József Bartha critically approaches the image in the media and the instruments that can manipulate a discourse through the image as an intermediary.

József Bartha (b. 1960) is a visual artist, stage designer and curator. In 1987 he graduated from the „Ion Andreescu” Fine Arts Institute (currently the UAD), in Cluj-Napoca. In 2004, he became an alumnus of the doctoral school of the University of Art in Budapest. He is the founder of the ARTeast Foundation and the B5 studio in Târgu Mureș, and is a lecturer at the Târgu Mureș University of Art. 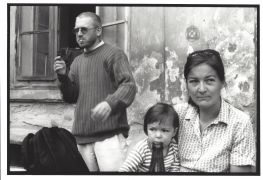