The project Earth Harp was inspired by my interest in the culture of the Hopi tribe, and in their conception of the universe and their mythology. It was an attempt to return. An attempt at approaching a hidden but nevertheless ever-present world. An attempt to experience the breath of the Earth without which nothing which we experience could exist. Without which we would not exist. An attempt to make contact with what we do not normally perceive, although we are fully dependent on it. An attempt to connect the inside and the outside. For the exhibition of the statue I chose the ice cellars in the basement of the granaries, a place where the worlds of the below and the above meet, a space of darkness and silence, a space closer to the enigmatic center.

Vladimir Vimr (1954) is an artist living and working in Prague. He mainly creates typographical and book illustrations and is a member of the Medehaha theater ensemble.
21.6.2017 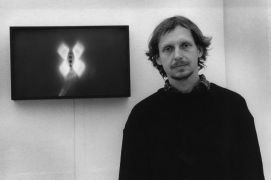