Igor Hlavinka came to Plasy in the summer for the symposium Transparent Messenger and returned in September to stay and to work on several clay objects, which he planned to fire in the Břasy or Horní Bříza ceramic factory. He joined Fungus and exhibited two of his organic shape sculptures in candle light in the basement of the granary.

Between 1994 and 1995, I worked on models of a series of ceramic objects / buildings which were the result of my long term interest in archeology, African clay architecture, natural forms and enchantment with Tolkien’s novels. My direct inspiration for ribbed constructions was the reconstruction of the prehistoric hut of the mammoth hunters in Siberia, built from bones and mammoth tusks. In addition, I was also inspired by the excavations of the Neolithic tower in Jericho, macrophotography of seeds and images of plants by Karl Blossfeld’s amazing book Urformen der Kunst (1929).

The reason I started to make such models in clay (an idea I had in my head for many years), was due to my visit to the Hermit Symposium in 1993, where I met Čestmír Suška. He asked me to assist in the construction of a huge clay sculpture he was making there. I was so excited by working in clay after some years that I took several kilos of clay to Prague, and over the course of a year I managed to make several small scale models of bigger sculptures.

Thanks to my Hermit friends, I had the chance to make them in a larger scale during the next year in the corridor of the Prelature in Plasy. Jiří Zemánek apparently found that this work fit into his concept of the symposium Fungus, and he invited me to install two them (not yet fired, only polished) on the ground floor of the granary. In the dark room they were lit by candlelight.

**Igor Hlavinka **(1959 in Prague) is Czech visual artist working in the fields of painting, photography, sculpture, landscape, restoration and design of garden architecture. In his mutifaced work are recurring motifs such as archetype, structure, balance, organic shapes and portraits.

Between 1994 and 97 he participated in symposia organized by Hermit Foundation. In 1997 he curated the symposium O Počátku / Near the Beginning. Between 1979 and 1982 studied at DAMU (Faculty of Theater at the Academy of Performing Arts in Prague at the department of stage design (prof. Albert Pražák).

In 1986 graduated from the painting studio at the Academy of Fine Arts in Prague (prof. František Jiroudek). He was a member of the Tunel group (with Exner, Hlavinka, Chmelová, Jírová, Knotek, Wagner, Zoubek) from 1989 to 1992, and since 1996 has been a member of S. V. U. Mánes.

Since 2007 is he has been engaged in drawing and paintings of mountain landscapes — sometimes real, mostly imagined — (the series Ostrovy v oblacích / Islands and Clouds). He has participated in many group and solo exhibitions and lives and works in Prague. 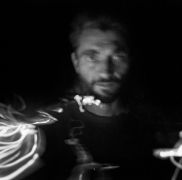