Radovan Kodera (born 1960, Cheb) lives in Pilsen. Following high school and the military service, he has worked in various jobs. He has been involved in photography since the second half of the 1980s, since 1992 he has worked as a documentary photographer at the Pilsen Heritage Institute, and since 2012 he has been teaching at the Ladislav Sutnar Faculty of Design and Art at the University of West Bohemia in Pilsen. In 2014, he graduated from the Institute of Creative Photography of the Silesian University in Opava.
He is Chairman of the civic association Pro Photo and the curator of several exhibitions at the Great and Old Synagogue in Pilsen, initiator of the documentary exhibitions Plsen in the Velvet Revolution of 1989. He has produced Jews Lived Here - a history and the present state of Jewish monuments of Western Bohemia, Stories of the Disappeared (about the Holocaust and Jews in Pilsen), (Neo)Nazism and Communism about the advantage and decay of democracy, or Miroslav Zikmund 95. He has been exhibiting his work since the 90s, he participated in several exhibitions and publications on architecture and art (Architects of Pilsen, Sculpture in Architecture of the XX. Century in the Pilsen Region, Pilsen in the Period of Art Nouveau, Loos - Pilsen - Connections, and others). He is also author of a memorial project devoted to the victims of The Holocaust in the Garden of Remembrance in the former Auxiliary Synagogue in Pilsen. He regularly attended the Hermit Symposia in Plasy. 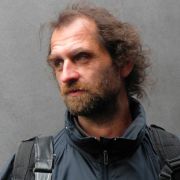