Abdelali Dahrouch: It depends on what the meaning of the word "is" is

The art work is informed, it seems by the physical condition of a location and its narration - in this case, the monastery of Plasy, an ancient religious structure layered with textures of history and time. Within the framework of "Fairy-Tales", an investigation on notion of language, the narrative and their interpretation, the art work is "subject of ideas of site specificity, local community, history and power structures." if one feels compelled to examine the different ripples of meaning and interpretations that the work creates by simply being physically present within this new context. The immediate physical structure seemed to steer or at times dictate the direction of the work. A dialogue needed to take place, an attempt to seduce the location, by utilizing its existing structural features and their potential transformations (acoustics, vaulted ceiling, corners doorways) in order to "defeat" it for the purpose of asserting the piece, and perhaps in the process realize a higher level of maturity. The collapsing of the master narrative, hegemonic discourse i.e. capitalism, deceptive consumerism, with that of the fairy tale, seems perhaps, uncanny, but the uncanny is quite reveling. Semantic intersections are visible, a rabbit’s hole to our world viewed from a different vantage point. "it depends on what is the meaning of the word "is" is..." is Bill Clinton’s notorious statement when he appeared before the Grand Jury. It was the feeble attempt by the leader of the "Free World" to define "sexual relationship". In sense we are reminded of "Alice Through the Looking Glass" fairy tale, and particularly  her exchange with Humpty Dumpty:
"When I use a word", Humpty Dumpty said, "It means just what I choose to mean - nether more or less."
"The question is", said Alice, "whether you can make words means so many different things"
"The question is" said Humpty Dumpty, "which is to be a master - that´s all."
While our domestic obsessions are focused on semantic delusions, the world, on the other side of the looking glass is too preoccupied with its daily survival. Title: it depends on the what the meaning of the word IS is from semantics to the distortions of propaganda and advertising, wheatear in Bill Clinton´s famous sentence during his testimony before the Grand Jury last year, or in Alice Through the Looking Glass, when Humpty Dumpty says:
"When I use a word, it means just what I choose it to mean, neither more nor less."

Abdelali Dahrouch is a video installation artist, writer, and activist who is based in Los Angeles and teaches at Otis College of Art and Design. Born in Tangier, and raised between Morocco and France, Dahrouch emigrated to the U.S. in 1984, and works between the U.S., France, and Morocco. His work engages the interface of Buddhism, ecology and Postcoloniality, as it bears upon transnational migration and U.S./European imperialism, largely in relation to the Middle East and North Africa.

Dahrouch graduated from Pratt Institute in New York with a Masters of Fine Arts. He was a fellow in residence at the Whitney Museum of American Art Independent Study Program in New York; the Cultural Exchange Station at Tabor in the Czech Republic; the Cimelice Castle in Cimelice, Czech Republic; and the Metamedia Center for the Arts in Plasy, Czech Republic. In November 2003, he was a Visiting Artist at Home Works II-2003: A Forum on Cultural Practices in Beirut, Lebanon organized by Ashkal Alwan, the Lebanese Society of Plastic Arts, a non-profit arts organization. He received an “Intra-nation” BANFF Residency Fellowship in Banff, Canada in Summer 2004.

Dahrouch has exhibited his work in New York, Chicago, Portland (OR), Los Angeles, Seville (Spain), Sophia (Bulgaria), Tábor, Čimelice, Plasy and Prague (Czech Republic) and Clairemont Ferrand, France. A solo show entitled, Desert Sin, Revisited exhibited at the Montgomery Art Museum, Pomona College in Claremont, California in 2003. He has exhibited at the Arab American National Museum in Dearborn, Michigan; the Athens Institute of Contemporary Art in Athens, Georgia; the Guggenheim Gallery at Chapman University in Orange, California; Liquidation Total Art Space in Madrid, Spain; W. Keith and Janet Kellogg University Art Gallery at California Polytechnic University in Pomona; Articultural Gallery in Santa Monica, California and the Worth Ryder Gallery at the University of California at Berkeley. His upcoming shows in 2007-2008 will take place at the Berkeley Art Center in Berkeley, California; the University of Rochester Memorial Art Gallery in Rochester, New York; the Cultural Center of Hillsboro in Oregon; The Biola University Art Gallery in La Mirada, California, and at the Museum of Contemporary Art (MUHKA) in Antwerp, Belgium

Abdelali Dahrouch is a Buddhist teacher, writer, and breath work healer. In his practice he offers counseling and instruction in Buddhism, breath work and guided meditation. His work facilitates the art of mindful breathing and other meditation methods, which enable his clients to connect to their Higher Self on their path to self realization. Trained as a painter, Abdelali received his Masters in Fine Arts; he taught Art Studio, Art History and Critical Studies at an art collage and exhibited his work nationally and internationally, before devoting full time to his career as a spiritual teacher. After two and half decades of intensive study and retreats, Abdelali underwent his ceremony taking refuge in Buddha with his master H.E. Nubpa Rinpoche, who blessed him with the Buddhist name, Konchok Tsoglam. Abdelali continues in retreats and study, receiving teachings and empowerments from highly realized beings such as H.E. Garchen Rinpoche, the Zen master Thich Nhat Hanh, H.H. The Dalai Lama, and others. He lives in Los Angeles with his wife and three children. 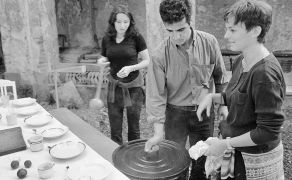