To commemorate victims of North/South violence. There are many Norths. There are many South. There are barriers to reconciliation. There are those who´d remove these. This work is for life. Elements: a large oval stone from Ireland, a small planting fork, a small planting trowel, a stripped, clear varnished tree twig, 48 white flowering Alpine plants, metal rods to be embedded in the earth, 2 small metal nameplates engraved AXE IS, a larger metal plate with title AXE X IS and statement, a compass.

Note: Many of McLennan works are inspired by different religious and political conflicts, especially the war between the Catholics and the Protestants in North Ireland in last decennia.

Alastair MacLennan (b. 1943, Scotland) is one of Britain’s major practitioners of live art. Since 1975, he is based in Belfast, Northern Ireland. He was a founder member of Belfast’s Art and Research Exchange. He is a member of the performance art collective Black Market International (BMI). He studied at the Duncan of Jordanstone College of Art and Design of the University of Dundee in 1960-65. 1966-68 he received his Master of Fine Arts from the School of the Art Institute of Chicago. From there he escaped the Vietnam war to Halifax/Canada where he taught in the Nova Scotia College of Art and Design. Here he developed time-based works in the landscape and absurdist and didactic actions within the college. He is currently Emeritus Professor in Fine Art, the University of Ulster in Belfast, Honorary Fellow of the Dartington College of Arts, Devon, and Honorary Associate of the National Review of Live Art, Glasgow. MacLennan’s live work is prevailingly long durational. During the 1970s and 1980s he presented long durational performances in Britain and America, of up to 144 hours. His work looks into political, social, religious, ethical and aesthetical questions. For his performances and installations, he uses the term “Actuations”. He participated in the festival on the invitation of Tomáš Ruller and returned to Plasy in 1998 to realize 12-hour duration performance in the courtyard. 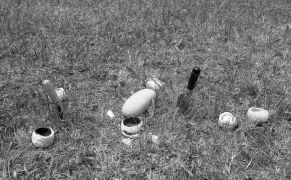 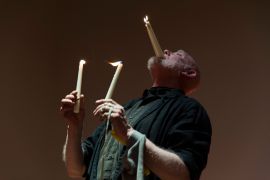 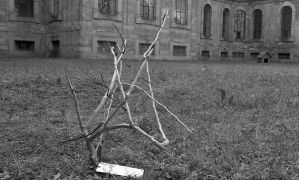