Anke Schulte-Steinberg created during the symposium a single light installation in the granary and a series of shadow performance in the convent during the festival. The shadow play took place in a ground floor dark room without windows under the Chapel of St. Benedict. By moving the light source suspended on a long rod and by putting the light near to the walls or the floor, the architecture of the entire oval space started to move. The shadow theater was repeated during several times and was intended only for a small group of visitors.

Anke Schulte-Steinberg (1956) is a German visual artist, has been working for many years with light, creating light installation and projections, using a variety of fluorescent lamps, lamps or LED lights. Her work is based on optics of the 1960s. The author builds her shadow machines with the simplest means (wiper motors, wires, light bulbs, and cables). In traditional sculpture, light falls on solid material and is modeled by reflections and shadows. Anke Schulte-Steinberg turned this principle and the light become central, moves on the edge of the shadow breaks the static of the object.

In 1996 Anke collaborated with Suzanne Miller and Jens Brand in Mex festival in Dortmund. 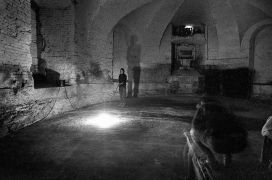