A Practice within a Vision

The sound of the Arachné is all-encompassing, a veritable army of sewing machines bashing their needles, 120 of them to be exact, in mechanical mercilessness.

The narrow studio of Milada Hynková, a simple one-story house, has gradually become filled with all things Aradecor, the textile technique produced using the Arachné, which it has been gnashing out for half a century. Yet the first impression of Hynková’s studio doesn’t immediately scream ‘studio’; there’s no telltale smell suggesting a medium, no arrangement of canvases or heaps of material. Upon entering you get more the sense that a collector lives here, the hallway and kitchen to the right are filled with Aradecor pieces which grateful artists have given to Hynková over the years.

It isn’t until you move into the rooms on your left that you start getting a sense that this is a place where things are made. In front of the 2½-meter-long machine, there is a large table for artists to meticulously stretch out their swatches of wool, arranging them to fit their vision. The back room has another work table, and shelves with every shade of wool imaginable, built right up to the ceiling.

Aradecor is a technique developed in 1966 by the academic painter František Šlegl (1921-79), who initially explored the machine’s particular uses, obtaining a patent for the technique. His method makes use of the layering of wool fibers instead of the weaving together of threads. This is followed by an ironing step and then multiple stitchings via machine. After Šlegl’s death, Hynková, a graduate of the School of Applied Arts in Prague, took over the studio’s management, taking over the Arachné machine in 1992, saving it from destruction and moving it out of the Elitex factory space in Kdyně it was originally conceived for. Hynková held the first Aradecor symposium in 1994, and has repeated it several times over the years.

In 2008, the artist Václav Sika brought fellow artist Sráč Sam to Kdyně, and introduced her to the Arachné, and to Hynková. Sam began working with the machine herself, bringing it and Hynková onto the stage of the contemporary Czech art scene through video documentation that connected Hynková’s work with contemporary tendencies (see the joint exhibitions of Milada Hynková and Veronika Dolanská), and organizing residencies focused around the use of the Arachné and creation of Aradecor pieces. The first of these residencies was in 2012, and one followed in 2015.

Sam’s work with Hynková’s legacy has recently culminated in an exhibition featuring Aradecor pieces spanning fifty years, from 1966-2016. The exhibition marks an anniversary, and yet Sam dismisses the notion, saying, “Anniversaries are determined by numbers, and this means nothing. We don’t need anniversaries to establish uniqueness [Aradecor Catalogue].”

Sam goes on to explain her decision for having this important, wide-ranging retrospective exhibition in the tiny and sleepy town of Kdyně. After all, Plzeň is just 60 km away, and the exhibition would doubtlessly garner more attention and visitors if it were held there. The decision to hold the exhibition in Kdyně is a nod to an unlikely evolution. Once a town known for its textile industry, Kdyně has since become sleepy and nostalgic. The disappearance of its textile mills, around which the settlement was founded, would seem to render the town obsolete. Yet the singularity of the Aradecor, of which the Arachné in Kdyně is the only extant example, infuses the town with a new identity born out of its original one. The Arachné was not built for the purpose of making Aradecor, it was not meant to be used for art, yet its failure to produce a practical good led to the production of an impractical one. “The people of Kdyně know Aradecor,” says Sam. “They’ve become conjoined to it. Moving the show to the capital is nonsense. The capital of Aradecor is Kdyně.”

Sam’s approach to Aradecor and the recent exhibition says much about Sam83, the name of the gallery in Česká Bříza she opened in 2006 as one of the projects of “Visions for a New Culture and its Place (1989).” In her own words, the main idea is to “… create appropriate social-cultural conditions for the automatic and natural transfer of information, insuring the compact development of social culture without artificial boundaries. [Artyčok]” Sam83 is an attempt to create these conditions through a wide range of activities, ignoring the “artificial boundaries” set by expectations for how things should be done. Even the name she goes by, Sráč Sam (Sam to those who know her), flouts convention. In lieu of a title (which she may or may not hold), Sam opts for what translates to something like “Fucker Sam.” The name is masculine, and despite being a woman, writers often choose masculine pronouns to refer to her. Taking Sam’s moniker a bit further, it can also be translated to “Fucker Alone” or “Fucker Himself.”

Along with Denisa Bytelová and Lena Zikmundová, Sam not only puts on a variety of exhibitions each year, but also produces the quarterly publication PIŽMO (“Musk”), holds residencies, and organizes 4OKNA, in which an artist is invited to present their work in the cozy environment of a family home in Klatovy. This impressive array of activities is carefully recorded by Zikmudová and archived on videos, available on Sam83’s website and through her YouTube channel. Sam83 is completely independent and self-funded, without any external grant support and if they need a space for residencies, Sam and her husband build it themselves. Asked how they function, Sam says, “Very simply: we put the money we make into where we think it’s important. We don’t pretend to be exclusive or selective, we just proceed naturally.” 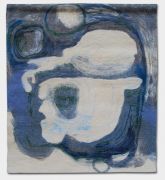 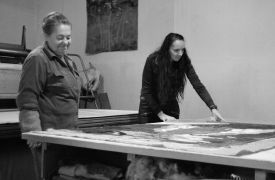 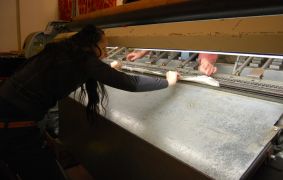