In 1995 (Growthrings), I was allowed to use the ground floor in the granary at the Plasy monastery and in 1996 (Subrosa Subterra) I moved up one floor, a space of exactly the same size (40 m x 15 m x 3 m approximately), but with a wooden floor and many beautiful windows with wooden shutters.

I decided to make a giant Camera Obscura, revealing the effect of sunlight inside the room as true projections of the outside world with all its colors, movements and sounds. In essence, the installation is both a 'photographic' work, explaining how cameras work with or - in this case- without (!) glass lenses. But it also puts one in the center of a filmic experience of a real-time live world, which is upside down and reversed in direction. Sounds penetrate the room too: birds singing, cars passing, the sounds of people chatting, murmuring and the wind.

This all may seem rather complicated. But it is not, if you understand the matter really well. In fact, these are things and principles we perceive on a daily basis and which were first discovered (or at least used and properly implemented and documented) by Leonardo da Vinci. He was able to create the first 'photographs' by using cloth or light-sensitive surfaces to beam a sharp image onto and to create a lasting depiction of reality through photosynthesis.

This strikes me on a philosophical level.
Especially, in this age- which I would call 'the mass-age' in which all comes to us in masses and all these masses get formulated in to 'messages' but it eventually becomes a 'mess-age' altogether -- the aim of making a body of work so simple but so powerful at the same time, was a long lasting rewarding experience.
It provided me with a lot of fulfilment and clarity over things and I still do and create today with great pleasure.

As a matter of fact, I believe we crave for simplicity and authenticity in these days where technique, financial means, marketing, and ideologies cluster into complex entities, far from the roots of the human condition and of nature itself.

The town of Plasy, the Monastery, the Hermit Foundation and all the people contributing to its message to the world, helped me - and most likely the visitors of the installation- to get some clarity over what is right. All combined efforts helped to formulate 'meaning and a point of departure'; consider it birth, or growth.

To summarize the content of the space and its installation:

I was able to ban all (sun)light coming into the space by closing it entirely, except for a total of 6 projection pinholes, through which tiny rays of light could penetrate the dark space and project sharp and vivid images of the outside world onto white screens in various places and onto the floor, which was partly covered with white flour.

People were attracted and invited to come into the space around midday when the sun was at its highest, and Rajesh Mehta played his trumpet at the far end of the exhibition space, luring people to slowly come forward (40 meters) in the dark towards the pinhole projections.

It takes around 5 minutes for the human eye and its iris or pupil to fully adapt to darkness and for it to open fully. Similar to the operation of a film lens and its aperture, one will at first see no image at all. But gradually we will be able to discern shapes, floor beams, screens, and eventually, see all the projections from the outside world INSIDE the room. As if a lens was opened gradually, our eyes open up to a world shrouded in obscurity.

This is an amazing experience. Also, Rajesh Mehta's trumpet playing went from prehistoric chaotic noise to tones, short melody, to well shaped structured music.
In fact, the installation showed us in a time-lapse of 10 minutes or more, how:

* Our eyes work (and how we perceive imagery).
* How a camera (and a sharp image) works.
* How creation itself is defined and shaped in time. How it is brought into our lives and minds. Coming from daylight, going to obscurity and back to light again.

I am truly very thankful for having had the opportunity to produce such a work and to collaborate with a few people who immediately understood its core essence.
I would create one again if anyone wishes me to create a Camera Obscure of that magnitude or impact.

It is a meditation worthwhile to take part in for young and old. 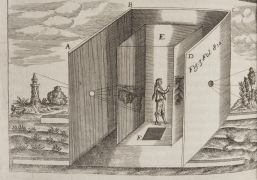 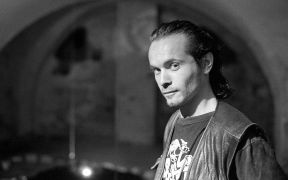