Sergey Starostin is a musician, a tireless explorer, and a talented master. He is a brilliant Russian folk and jazz musician, singer and multi-instrumentalist. He’s been collecting and studying Russian folk songs for many years now. In this sense, he is not simply a performer, but also a serious explorer of the folklore who sees a number of phenomena from his own unique perspective.  This perspective is then shared through his musical endeavors. For instance, in Sergey’s opinion the reason for the sadness of the ballad songs is not simply the heavy beat and the phonetics, the chanting sound of the Russian language, but actually the fact that traditional songs were created so as to prevent these dreadful and sad events the song related from happening in real life. In a way, this was a magic ritual.
Starostin’s admiration for folklore dates back to his childhood. His first encounters with the roots of Russian culture came about thanks to his family. His parents were people of ‘the generation that used to leave the villages looking for new opportunities in the city’, yet he was brought up in a family environment where Russian folklore traditions were well remembered and preserved.
Sergey Starostin started studying the Russian folklore traditions while he was still a university student. After finishing the first year in University he went on an Ethnological expedition in the Ryazan area where he heard the singing of an elderly local village woman. Starostin would recall afterwards: “she had the amazing ability to not simply sing but rather, as the theoreticians would say, create an astonishing ‘musical image of the song’”.  This was the ultimate experience that has branded his musical style. 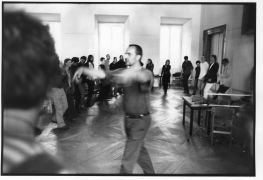