Through the Other Lens

A profile on the Květoň brother's work and practice through their shared label, Andere Seite Studio.

In the art world, twin duos are not entirely uncommon. Some work only momentarily on a particular project, while the artistic practice of others is bound together into a singular identity. Zdeněk and Radek Květoň are twin brothers born in 1974 in Litoměřice. They studied photography, video and graphic design together, first at the Faculty of Art and Design at the University of J. E. Purkyně (FUD) in Ústí nad Labem and later at Film and TV School of Academy of Performing Arts in Prague (FAMU) and FUUD (Ústí nad Labem), and they continue to work together and exhibit under the project name Andere Seite Studio (formerly Pudon). In addition to the studio, the brothers have founded ASSociace (now officially ASSociace Kubinstadt), an organization created to organize and promote local artists while providing them with a website for exhibiting their work. The organization is also a legal platform allowing for artists to apply for grants for their own projects. ASSociace also attempts to provide the means for joint exhibitions and publications. At the moment the brothers are working on publishing an almanac of artists from Litoměřice via ASSociace.

The name of the Květoň brothers’ project name is a tribute to Alfred Kubin, also born in Litoměřice, and his novel Die andere Seite (The Other Side). The studio’s abbreviation, A.S.S., has connotations in English that the brothers are well aware of. They admit that it may provide a somewhat “misleading impression,” nevertheless “prejudices arising out of ignorance” have never been a concern for them. Keeping the name and using it in various other projects (ASSteroids, ASSociace) is in good humor and, as the brothers put it, “a bit punk.” While the Květoňs’ approach to sticking by their name despite its funny and perhaps vulgar nuances may be punk, their work certainly isn’t. Their two major ongoing projects, Terezinalia and Heliofytogravurass are characterized by a gentle, meditative quality tinged, particularly in the case of Terezinalia, with an eeriness reflecting on a traumatic past.

Terezinalia is a long-term project the Květoňs began during their studies with Pavel Baňka at FUD and refers to all of their works related to Terezín. The overall project goal is to “change the paradigmatic perception” of the place. As the brothers put it, “We didn’t want to view Terezín as just a memorial of the Holocaust. We were interested in the total energy of this architectural work, its history as a whole as well as its social life outside of negative connotations.” Although on their website, the project is currently divided into three parts, Signa, Teroids, and Transformations, in reality the project’s scope is far greater. The brothers admit there are dozens of other sections thematically dedicated to, for example, architecture, panoramic snapshots, animals, gardens (which have now, for the most part, disappeared), pools, flood influences, the edges of the fort, and honeycombs. Alongside these numerous sections, the Květoňs have made around twenty experimental films and several books as part of the project. In the future, they hope to have a website solely for the Terezinalia material.

Signa is a collection of black and white photos of the dilapidated brick walls of the garrison moat space illustrating the “shadows of the old, vanishing in time and floating town of Terezín.” This project includes the changes made by the massive 2002 flood, and reflects upon the continual processes at work in any given place. The Signa images are dark and disconcerting, filled with a perceptible quiet capable of being disrupted at any time.

The Teroids project was first presented at Školská 28 Gallery in 2009 under the name ASSteroids. The exhibition presented a digital archive of 864 items designated as “teroides,” or scanned artifacts found in Terezín. Each object was digitally scanned and given a description detailing its “immanent characteristics” and where it had been found. By creating a neo-archeological archive, the Květoň brothers again attempted to veer away from the usual perception of Terezín and its relation to the Holocaust, placing it instead within the context of an archeological site whose found objects bear witness not only to “the sediment of Terezín history but also refer to the character of human presence in this specific place.” The project was presented again in 2013 at the Prádelna Gallery in Prague along with an audiovisual performance involving the experimental electro-acoustic band DoShaska. A video displaying various “teroids” with sound provided by the same band can be seen here.

Finally, Transformations takes a “destructive principle” and turns it into a creative one by exposing negatives of Terezín to natural elements creating a “symbolical return of the picture (a held moment) to its original source.” The exposed negatives are a collection of ruminating half-abstracts left with a lingering sense of form combined with erasure, neither complete nor incomplete but rather an image left in limbo.

Currently the brothers’ work has turned toward working with natural surroundings, especially plants. In collaboration with the Museum Novojičínska, the twins are preparing a large-scale exhibition on the forest’s evolution. Heliofytogravurass is a “post-photographic” project using a special technique to depict plants. The brothers have named this process “heliofytogravury.” Simply put, the technique includes “a combination of mediums on the boundaries of photography and graphics.” The project was inspired by Jiři Šigut who worked with photo papers in nature and includes an analogue process incorporating an alternative to the usual photo materials. This allows for the brothers to “play with their ability to react not only to light but also to other physical and chemical influences.” The end result is an unfinished series that is indeed on the boundaries of medium. Alternatively full of light and darkness, the plants shown create ghostly and colorful environments around themselves, swimming in aural hues, sometimes with unexpected twists brought on by any number of factors that came into play during their creation.

While the brothers note that they’ve worked together since they were children, there seems to be one exception: drawing. For the brothers this is a discipline representing “a personal, inner process” rarely garnering the need for collaboration. The brothers also admit they sometimes work separately. Nevertheless, despite the fact that some things are created apart, these endeavors are inevitably released as a part of the A.S.S studio moniker.  For the Květoň brothers, their way of working and producing is an utterly natural one, a process whose splits are only temporary, eventually flowing back to appear as one, unified effort. 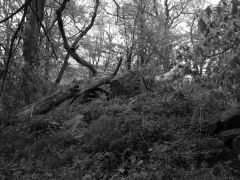