The Pilsen Ensemble was founded in 1912 and is still active under the name Tamburašský ensemble Dalibor. Since beginning its activities, it has experienced many successes, but also deprivation. Both world wars also took their toll. In spite of these woes, the Pilsen Tamburashi retained their original plucked instruments, as wall as a popular base of support.

The tambura is a plucked string instrument belonging to the group of lutes used in Bulgaria, Serbia, Croatia, Macedonia and other countries in southeast Europe. The name is derived from the Persian tanbur. Originally, the tambura was a solo instrument. The music served as accompaniment to singing and dancing. In the 19th century, simultaneously in several countries, new musical groups were forming. In Russia, these include balalaika and domra players. Western Europe saw the rise of lute players. Mandolin orchestras were being created in Italy. The world’s first such professional orchestra was founded in the early 19th century in the territory of today’s Czech Republic. 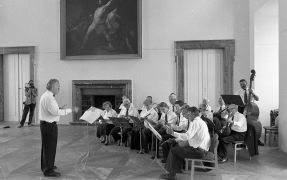