Diane Neumaier (b. 1946) is an artist based in Seattle and New York City. Her many series of photographs explore the range of the medium. Currently she is working on abstract color photograms. She is profesor of photography at the Mason Gross School of the Arts - the flagship public arts conservatory of Rutgers Univeristy.

Diane Neumaier created the traveling photography exhibition A Voice Silenced, a memorial tribute to her Viennese-born grandmother, Leonore Schwarz Neumaier, first contralto of the Frankfurt Opera who was murdered by the Nazis in 1942. Diane Neumaier was a Fulbright Scholar in Russia throughout 1994 and has organized numerous exchanges and exhibitions between Rutgers University and Russian, Ukrainian, and Eastern European artists and museums. 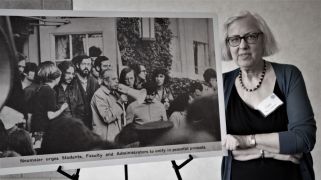