The Opposite Land trio was founded in 1996 by Jiří Durman and Alexandr Krestovský as a duo, where different musical experiences were melded in an unbounded musical expression loosely based on an Eastern European musical tradition with a considerable emphasis on improvisation. After common musical starts in the first half of 70s, influenced mainly by the jazz avant-garde, Durman was fully involved in free improvised music, while Krestovský switched later to early music, and since the 80s, has been singing medieval and rennaissance vocal polyphonic music.

Their first public appearance was in 1996 at a Jazz festival in Karlovy Vary. Since 1998, the Durman-Krestovsky duo has been working with different poetical texts from the Central and East European cultural region in the original languages (J. Skácel, I. Blatný, F. Listopad, O. Mandelštam, N. Gumilyov, D. Kiš, B. Hamvás, A. Kusniewicz, A. Miran, Romanian folk ballads, et al.), and the improvised parts of the music – composed mainly by Durman – has conformed more to the structure and poetics of the text. The duo participated on several festivals organized by the Center for Metamedia Plasy (1999 Plasy Monastery), Foundation and Center for Contemporary Art (2000 Čimelice Castle), the Serpens Artistic Association at Palmovka Synagoge, etc.

In 2003 Ružena Hejná, a soprano singer, joined the duo and together with an international team of visual artists they created the multimedia performance The Dream Hunters, based on the novel Dictionary of the Khazars by the Serbian writer Milorad Pavic. The project was sponsored by the Open Society Fund, the City Council of Prague, the Jewish Community of Prague, and was presented in the Libeň Synagogue.

In 2004, The Opposite Land trio presented a project named The Danube, based on the book by the Italian writer Claudio Magris. The music performance and narration were accompanied by projected images created on a computer by Edita Vološčuková from Slovakia, a participant of the Dream Hunters project. In 2005 and 2006, The Opposite Land presented a performance based on the work of Czech poets Ivan Blatný, Jan Skácel and František Listopad. The performance is accompanied by a projection of photographs created by Jiří Ernest, student of the Film and TV School of Prague Art Academy.

In the beginning of March 2007k the Czech Centre in Moscow invited the Opposite Land trio to participate in the M@narchia festival of arts of the Central European countries where The Danube was presented. In June 2007, the trio presented a multimedia performance based on the poem Crack by contemporary Czech poet Miloslav Topinka. The performance was repeated in musically and visually modified form in 2010, again in the Libeň Synagogue. In recent years, the Opposite Land trio has also been setting to music the poetry of other contemporary Czech poets (B. Ditrych, J. Suk).

Jiří Durman is a Czech saxophone player. He played with Jiří Posejpal in the duo Durman / Posejpal, which was  significantly influenced by the Norwegian saxophonist Jan Garbarek, who built his originality from a synthesis of the poetry of Norwegian music, folk and classical, with free jazz. Durman is also a member of Multiinstrumentalist. Together with Alexander Krestovsky and singer Růžena Hejna, they founded the trio Opposite Land, accompanied by recitation of verses by Miroslav Topinka, Claudio Magris and Jan Skácel.

Alexander Krestovský is a multi-instrumentalist, member of Duodena Cantitans, Schola Specialis (2004-07), The Opposite Land = Protější země (trio: Jiří Durman and Růžena Hejná). In the recording studio, Jiří Durman and Jiří Posejpal made use of Alexander Krestovsky's vocals, which complemented their music duo. Krestovský is a long-time collaborator with Arnold Dreyblatt (USA/SRN). 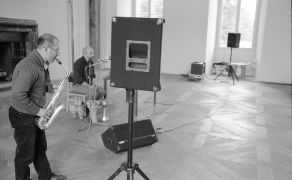