After not seeing each other for several month, Pavel Fajt and Fred Frith met in the Plasy monastery. They performed together in the refectory of the convent on the 21st of June.
Mr. Fajt was on percussion, dishes, a child's xylophone and others.
Mr. Frith was on guitar, playing both with fingers and with various different objects. Ambient sounds were provided by Mr. Frith's one-year-old son, Finn.

Fred Frith (born 1949) is a british songwriter, composer, multi-instrumentalist (bass, keyboards, violin) and an improviser performing mostly on various permutations of the electric and acoustic guitar. Occasionally, he uses crude home-made string instruments of his own invention. He learned how to compose in rock bands, starting with Henry Cow in 1968. This meant writing for and with people that he knew, and then arriving at the final result through a collective rehearsal process.
"During the Henry Cow years I fell in love with the recording studio and its endless possibilities. I embrace the idea of the 'work' as an unfinished and constantly mutating entity. Collaboration, improvisation, sculpting sound in the studio, and treating composition as an open-ended process remain central to how I make music."
Fred Frith 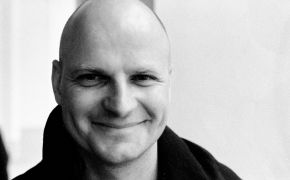 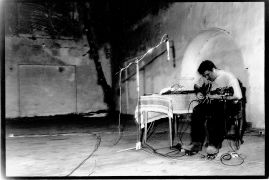