"I like to work in the specific environments of deserted empty buildings. Their atmosphere always strongly influences me. I try to react to these impulses and not to disturb the original constellation of forces through my work. In my installations, I often work with basic symbolism. Lately, I have been interested in pieces on the border of visual and sound / music expression. Sound gives objects another dimension. Sometimes playful, sometimes transposing it to other levels of perception. Thus, the audience can relate much more directly."

Martin Janíček is a sound-artist, sculptor, musician and sound designer who works in the field of exploration of acoustic qualities of various materials - he is a builder of new musical instrument. Most of his works feature an interactive quality and have a concentrated, simple form. He is conceptually bound to the site-specific nature of his work.

Born in 1961 in Prague, he was originally trained at a bronze foundry, then studied the Academy of Fine Arts in Prague (1990-97), later worked as the assistant of professor Miloš Šejn at the Conceptual Department. Since 1998, he has taken part in many collaborations. Since 2000, he has been a core member of the mamapapa NGO, numerous site-specific projects in both the CR and abroad. He focuses on unused spaces and social issues - minorities, homeless, language. 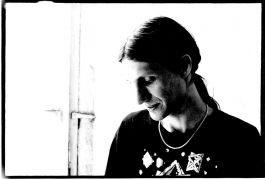