Adam Klimczak: The Room for Me and My Father

installation with sound and photography
convent

Adam Klimczak (born 1957) is an artist, curator and one of the most important animators of culture in Łódź. He is co-organiser of Construction in Process and the Artists’ Museum. For 30 years, he has been running the Wschodnia Gallery, a space outside of an institutional structure whose idea is based on the concept of the artists’ community, both local and international.

Between 1975-80, he studied in the Art College (now Academy of Fine Arts) in Łódź and received his diploma from the Department of Painting and Graphics. He has created many installations, photographs, performances and artistic interventions, plus works in the public environment in works of a site-specific nature. Many of his projects are ephemeral, they happen here and now and only documentation remains after they are finished.

Adam Klimczak’s art works with themes associated with place in a literal sense – the reaction to an existing space, and also a reflection over the essence of a given place, especially one’s own space. In his case it’s a specific space, an apartment at Wschodnia St. in Łódź. The place is at the same time a private apartment and his studio, but above all an art gallery to which all other aspects of life are subjected. It is difficult to draw and keep a line between the social sphere – exhibitions and openings – and the private life of the host. After openings, the public and artists gather in the famous kitchen at Wschodnia St. where parties last till the early hours of the morn. If an artist has to wash him/herself after the performance, he/she uses Adam’s private shower, if someone comes from another town, he/she may sleep in the gallery.

Adam Klimczak analyses the character of this space in works such as Exposures of Reality (2006 together with Jerzy Grzegorski) and Triple Vision (2013). Exposures of Reality is a photographic installation whose theme and the venue of its presentation is the space of the Wschodnia Gallery and its closest vicinity. Photos of various formats and shape hung at various levels evoke associations with the work of conservators who scratch a fragment of one layer and then discover a subsequent one. Here, artists can discover what’s behind the wall – a fragment of a kitchen, the other room, hallway, view from the window.

Triple Vision is a series of photomontages in which the artist refers to the places in which art emerges – the artists’ studios. Artists often live in their studios because of the character of their work and financial limitations. Usually, these are spaces of unstable status – rented, dependent on the politics of the town, owner, etc., which translates into a lack of stability for the artists’ existence. Adam Klimczak photographs the apartment-studios of his friends and contrasts them through a photo-montage with his own place. In this way, out of two joint spaces emerges a third one – a virtual common space.

Based on the same principle, he created the series Fireplace (2009), whose motif is a fireplace and shows various types of fireplaces in various places. Klimczak reminds the viewer about the perennial functions of a fireplace – providing heat, integrating the community, evoking a feeling of safety. These are compositions built in a “baroque” way – the artist created them using a strange perspective, just as with the photo Fireplace with my Parents or in the photograph Fireslides. Behind the stove which stands in the Wschodnia Gallery, there opens a room with red walls and a fireplace in the background, one which in reality does not exist. The photos of fireplaces were taken when the artist was in Ireland and then he layered the reality of Łódź of top of them.

Adam Klimczak’s art uses an important motif - that of his parents (both deceased). In 1996, during his residency in Art Omi, NY he placed two objects in a tondo shape on a pond. On one of them he placed his own photo and he placed his father’s photo on the other. The action during the 1st Contexts Festival in Sokołowsko in 2011 was a kind of reflection of his parents who had recently passed away. The artist led the public to a few chosen places in a small village – a shop, park, the ruins of a sanatorium. These stops he called stations. He hung the photo of his father on each of them and told a family anecdote. Each station was accompanied by a ritual feast – the artist had a shot of vodka and ate herrings and marinated mushrooms which his father used to prepare for him.

The series 185 photographs with Lodzia was devoted to the artist’s mother. The inspiration to create these works was the figure of Ann Skorecki Levy – a girl saved from the ghetto, who decided to come and visit Łódź after 40 years. An artist from New Orleans – Robin Levy who was Ann’s daughter – wrote to the Wschodnia Gallery asking for help. In this way a Memory Project – a site specific exhibition emerged, during which Klimczak showed his own work. "The work 185 Photographs with Lodzia is a personal dedication to my Mum – Leokadia (Lodzia) Klimczak whose long life, determined by history, was an inspiration. It would never have emerged in such a form of documentation if not for the memories of a messenger from New Orleans – Robin Levy. She and her mother – Ann Skorecky-Levy – made me look at the biographies of others from the perspective of the experiences of my own loved ones. We are heirs and followers of their memory which co-create and enrich us," says the artist.

Among the projects completed in the public environment is worth mentioning the projection presented as part of the Cafe Europa (2005). The display windows of the closed café Europe in Kosiciuszki St. in Łódź became a space for video-installations by various artists. Klimczak projected a graphics used once by the TV during night breaks in transmission. In 2012, as part of the Festival of Kinetic Art in Łódź, he presented a performance entitled Explorer. The artist held spotlights in his hands and lit fragments of a building. The action and photographs are an example of “city art” and a strong commentary upon this city. They bring to mind the words from Tadeusz Kubiak’s poem – “I am a rat from a big city.”

Adam Klimczak has created projects in Poland and abroad. Apart from his own artistic work, he provides opportunities for young artists to present their work. Thanks to the network of contacts with artist-run initiatives that he has built throughout many years, he creates an alternative for art and artists who are unable to fit into institutional or commercial frames. 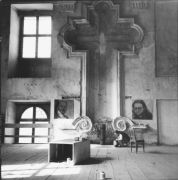 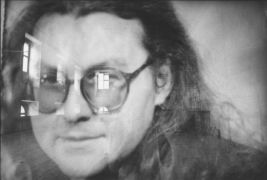 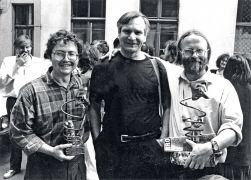 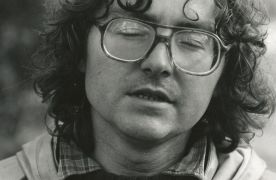