Helpful messenger of the immortals, whom Maia,

Daughters of Atlas, bore to Zeus of their union in love.

Zeus commanded besides that glorious Hermes rule over

And dogs and flocks, as many as broad earth feeds —

Over all beasts that move on the land-and moreover appointed

Hermes his son to serve as sole courier to Hades,

Who, though receiving no gifts, will himself give no unworthy prize

All those guide books are no use. You must travel at random, like the first Mayans, you risk getting lost in the thickets, but that is the only way to make art.

The demiurge Tezcatlipoca traveling with Robert Smithson in the Yucatan, 1969.

Air is a vital spirit, passing through all beings, giving life and substance to all things, binding, moving, and filling all things. Hence it is that the Hebrew doctors reckon it not among the elements, but count it as a medium or glue which joins things together, and as the resounding spirit of the world instrument. ...There are also from the airy element winds. For they are nothing else, but air moved and stirred up.

For, of the objects appearing and seen, we see nothing but their superficies; their depth can not be perceived by the eye because our vision does not penetrate opaque bodies.

Always. Magic, spirit possession, fast-track access of the occult, are heavily dependent on colonization and racist hierarchies as well as gendered ones.

Acknowledgements: The concept for the Transparent Messenger symposium took shape over the course of several years and emerged from encounters with various people, books, sounds, locations and pictures. The theme of transparency and information in contemporary culture and art is far too complex to be described on the occasion of the publication of such a humble project catalogue. Each participant of the symposium delivered his/her particular experience and his/her vision and in this way contributed to the entire event. When weather conditions were convenient between acts, objects, sounds, emotions and colors, there emerged the opalesque light field where transparent messengers are at home. We are extremely grateful to everybody who visited Plasy to bring, or not to bring, a message! Thanks to all who contributed to make Hermit III happen.

The concept of this symposium reflected the positive feedback from the previous year's HERMIT II - Growthrings which was rather too Baroque, too postmodern, too chaotic and turbulent. The title Transparent Messenger combined the topics of virtual space and communication and was a hint towards the participants to take a less material approach and to be more sensitive towards the environment. There were only a few sculptural realizations (that were, in 1993, rather challenging for organizers), with the exception of the monumental hay-installation of Ivan Kafka and the saltstone statue with laser by Monika and Dušan Kubínský. The original ambition of keeping a multicultural diversity of the participants failed due to the financial and manageriallimitations. The expedition of Polish artists from the Artists Museum in Lodz arrived, though without Ryszard Wasko, who did not managed to cross the Czech border. An organizational challenge for the curators was certainly the participation of, for example, the established Swiss artist Roman Signer, or the Rova Saxophone Quartet from San Francisco (we would like to thank the ProHelvetia and US Funds fundraising). For the production of the symposium itself, however, there was only a minimum budget available and participants did not receveive any honorarium for their works. The Ministry of Culture of the Czech Republic and the Soros Center for Contemporary Art in Prague provided support for publication of the catalogue and the production of the CD media with recordings.

CD: see the link on the right.

This documentary catalogue was published with the financial support of The Ministry of Culture of the Czech Republic and The Soros Centre for Contemporary Art in Prague.

We would like to thank the Minister of Culture of the Czech Republic Pavel Tigrid for his patronage of the Hermit III Project. The catalogue is published under the auspices of the Ministry of Culture and on the occasion of the symposium Transparent Messenger, June-July 1994 at the Plasy monastery, Czech Republic.

Published and organized by: "Hermit Foundation" and the "Society of Friends of Art Plasy". 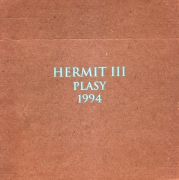 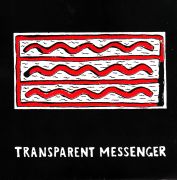 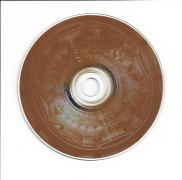 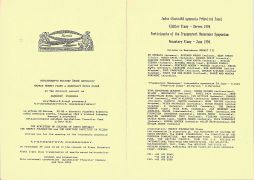 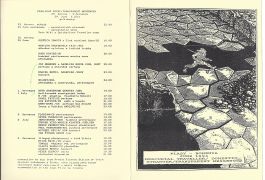