"An authentic projection of kinetic still life, 300 x 400 cm. A picture of a working watch mechanism and a schematic map of the world dating from the fifties were, during the symposium, projected onto the wall under the main staircase of the convent. The projection was visible only after dark. During the performance organized for the symposium's opening, the shadow of Michal Bouzek played with (and failed to turn on) the time machine."
Michal Bouzek

Michal Bouzek (born 1961) is a Czech painter and sculptor, who lives and works in Prague. He graduated from the Secondary Industrial School of Graphic Arts (1981) and in 1991 graduated from the Academy of Fine Arts in Prague. He was a member of the art group Svárov. The group formed after the mid-1980s and its members initiated and organized unofficial exhibitions during the 1980s which were held, in 1989, at the farmstead of Perič family in the village of Svárov near Prague. 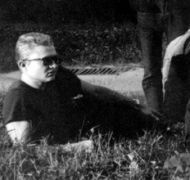 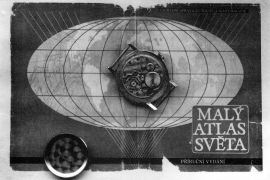