Sandro Dukić: A Journey Around the World in 100 Days

"Playing with the idea of reality, of subjective and objective worlds, I started planning my 'Journey Around the World,' which is being materialized through electronic media. Photos which are used for the installation are actually the documentation of the imaginary journey.
Individual and subjective, I identify with the idea of adventure as primarily a journey into 'the unknown.' The journey into the unknown is actually a metaphor for 'different' experience, and is not necessarily connected with any real transfer through space. The real point of origin is found in the past as well as in the yet unrealized future."

Sandro Dukić (born 1964) lives in Zagreb, Croatia. His works – spatial, architectonic and photographic installations and constructed films – move from one medium to another with ease. After graduating from the Academy of Fine Arts in Zagreb where he studied with Prof. Đuro Seder, he studied with Nam June Paik and Nan Hoover at the Art Academy in Dusseldorf. He also attended a Master’s course from 1993 – 1994 at the same institution (Prof. Nan Hoover). Ðukić has exhibited at numerous solo and collective exhibitions in all Croatian major art institutions and abroad in Slovenia, Germany, Spain, Portugal, Netherlands, the US, Italy, Serbia, Austria. As a lecturer, he has participated in several domestic and international symposiums. 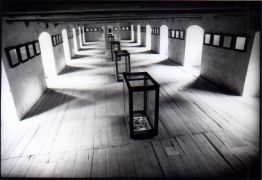