The soundscape GROWTHRINGS / LETOKRUHY is composed of extracts from the live recordings made during the interdisciplinary symposium HERMIT II, held in Plasy monastery, western Bohemia, between June and July 1993. This selection from more than nine hours of recorded music, acoustic and electronic, classical and experimental, does not aim to be a complete or pure representation, but rather to give a symbolic impression of one day in the building of the Baroque convent – a shortcut through the soundscape.
The choice of fragments, or extracts, was inspired by and meant to reflect the achievement of Santini´s architecture; his ideas in the equations of design and balance in construction that are to be seen in the convent building, seen and heard as a sublime model of the universe... a system of labyrinthian corridors with many vistas, special mirroring and unexpected horizons, inner landscapes and a whole scale of vibration patterns. This CD is the imaginary topography of sonic Growthrings that is to be felt in the echoing of different spaces and aural reverberations – The sound of flute voices of the Bamboo Organ combined with the whisper of a human voice created through the ethereal airy celestial levels of the convent in the early morning – the metallic resonance of Tibetian bowls, the rolling rumbling tones of the sliding trombone, piano strings and flute, all accompanied by the wooden xylophone from the ancient forenoon atmosphere in the dusty lofts of the luminescent chapels – bees and the mbira recall the sunny warmth of the empty inner yard of the building – the evening mood of the deserted and desolated subterranean passage ways resonating from the feedback of electronic waves of instrument and the sounds of distant bells and didgeridoo – night fall and the realm of darkness, full of the mysterious sounds of scraping and water dropping, the invisible stream of faraway steps through the damp cellars filtering through the Mitternachtmusic of Agon – the dawn of a new day and the breath of new light tunes in the soft tinkle music of the Horologe of Dreamers ... The rhythm and cycle of time, the space of duration. The sound architecture of the convent; a projection into the imagination of real shapes; the soundscape of Growthrings.

To select the material for the CD from 9 hours of recordings was rather difficult. Finally, I decided to mix in several tracks, several different recordings. After listening, Hans van Koolwijk called me rather angry to explain that it is not possible to use his music in such a plundrophonic way. Others were probably not so pissed, or thery didn't tell me. The CD was also distributed separately from the catalogue by Lowlands and Indie Records, but I don't remember any being sold. Unfortunately, some performances - for example Keiji Haino - were not recorded. 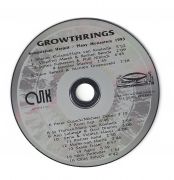 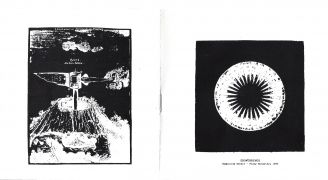