"One  day  when Pooh Bear had nothing else to do, he thought he would do something, so he went round to  Piglet's  house to see  what  Piglet was doing. It was still snowing as he stumped over the white forest track, and he  expected  to  find  Piglet warming  his  toes in front of his fire, but to his surprise he saw that the door was open, and the more he looked  inside  the more Piglet wasn't there."
A. A. Milne, Winnie-the-Pooh

"My last dream, which is haunting me more and more: I wake up in bed and find out that I have nothing to do and to do something at least, I'm going to visit the Piggy ..."
Marian Palla, 1994

Alan Alexander Milne (born in London, 1882). After graduating from Cambridge in 1903, Milne moved back to London with enough savings to live for one year. He was determined to become a writer. By 1906, he had been offered the position of Assistant Editor at Punch, a classic British humor magazine. He remained at Punch for the next eight years. In 1920 his son - Christopher Robin Milne was born, an event that was to change the history of children s literature. In 1923, during a rainy holiday in Wales, Milne began work on a collection of verses for children. The result was When We Were Very Young, published in 1924. In 1926, he duplicated his earlier success with the publication of Winnie-the-Pooh. The sequel, The House at Pooh Corner, followed in 1927. Now We Are Six, another charming collection of verse, followed one year later. It was through these four books, all illustrated by Ernest H. Shepard, that Milne acquired a vast audience outside of the theater. In the years since their initial publication, interest in these books has grown and grown. Milne continued to be a prolific essayist, novelist, and poet until his death in 1956. 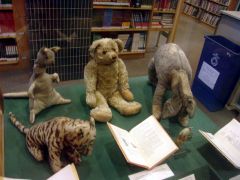