"The purpose of my concern with the picture is to observe us and our environment by operating a picture – 'picture use.' Though the character of the thing which forms our environment has a source, history, present, and future, there are not many opportunities when our concern is brought close to independent things. But for my 'picture use,' there is the 'Garden House as a Painting.'

The main purpose of this is to bring people’s concern closer, by showing them the event of the interior of the Garden House being handled as a theme for a picture. Then it shows them the existence of the Garden House, which can be understood only by passing through the picture.

The first step of production was to do a painting on a little canvas in the Garden House, making the north, south, east, and west walls a motif over three days. And it was necessary to record all changes in the canvas and the conditions inside with a camera.

In the room, damage is seen everywhere on the surface of the wall, showing the progress of time since the 17th century. Observing the wall, the figures of many people are reflected in my eyes – those who passed through here and settled from the time of the present back to the 12th century when a church was first built here.

The people who placed the pillars of oak into this ground, which is still a swampy place; the craftsman who carved stones and who piled up bricks; the monk who came and went through his faith and the world; the aristocrats who used the building as a residence; the people who participated in the resistance movement. Their figures had important influence on the content of my painting.

The interior production took two weeks, during which I was closed to the public. The information that I prepared for it at the time of its opening to the public are the following two kinds, plus another three points - a canvas installed in the centre of the wall on the north side, the surface of the canvas is covered with a white plastic board and the painting was covered. The record phonograph installed in both the eastern and western walls. A box-shaped pillar as high as the floor to the ceiling in the wall, and, hung within it, black-and-white photographs joined together in a long strip, in the shape of a movie.

I am expecting people who visit the room to have an opportunity to face a wall and form a connection with the Garden House with their personal consciousness and imagination."

Michiyoshi Deguchi (出口道吉) is a visual artist, living and working in Tokyo and Europe. His solo exhibitions include Galerie Eulenspiegel (Basel, 2013), Immagini Spazio Arte (Cremona, 2012), Gallery SUDOH (Kanagawa, 2012), and many others. He has had numerous group exhibitions, for example at Galerie Eulenspiegel (Basel, 2010), Tsukuba Museum of Art (Ibaraki, 2009), and many others. 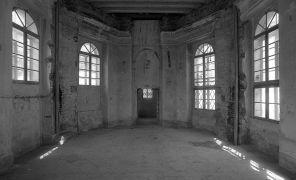 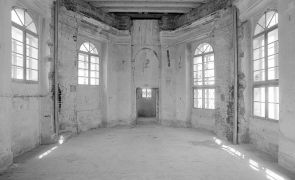