Was neither Being nor Non-Being then,
Neither Air nor Space beyond.
What was It, forcefully stirring?
Where? In whose Keeping?
Was it Water deep beyond sound?
Was neither Dying nor Undying then:
No sign to mark day from night.
Breathless, breathed ONE, by his
Own motion:
Other than That, was nothing
First: Darkness covered by
Darkness.
The universe an invisible wave.
Than, by Heat´s power came ONE,
Empty, from out of the void.
This creation, where it came from,
Whether a foundation or not,
He who Surveys from highest heaven,
Alone knows......... Unless He knows
nothing about it?
The Creation, Rig Veda X:129

The main theme for the symposium was conceived in tandem with Igor Hlavinka, who also took part in the organization – especially the preparations and conceptualization of the exhibition in the barn. To questioning the topic of origin, time, duration, archetype – something basic and primordial – corresponded with Igor’s approach to art and the world, but was also a reaction to the contemporary geopolitical, and perhaps spiritual, situation in the Czech republic and in wider Europe. In 1996, the war in Bosnia and Herzegovina ended and Radovan Karadžić resigned from his post, although armed conflict and murder in the Balkans continued until 1999. In the US, the Democratic candidate Bill Clinton was re-elected into presidential office, Al Gore became his vice-president. The election campaign of ODS in May and June of 1996 used Klaus’ slogan “Dokázali jsme, že to dokážeme!” (We’ve proven we can do it!). After the elections, a coalition was formed between ODS, KDU-ČSL, and ODA in what was called “Václav Klaus’ second minority government.” The government was tolerated by the growing ČSSD party whose members left the stands during the vote of confidence. Miloš Zeman, who was with ČSSD at the time, became chairman of the Chamber of Deputies which, in 1998, led to the so-called Opposition Agreement. In the mid-90s, Pavel Tykač and Jan Dienstl with theirs Motoinvest started "the third wave of the so-called coupon privatization" under the slogan “Small shareholders, go cry me a river,” and Motoinvest went on to buy the Bank of Pilsen. Prime Minister Václav Klaus called such entrepreneurs the “pikes in the Czech entrepreneurial pond” and, in 2006, Tykač was accused by police of organizing a billion-Crown embezzlement of CS Funds.

In May of 1996, the National Gallery opened the first part of its exhibition project “Dawn of Magicians?" (Art, Science, Society at the Turn of the Century)” which took place in the Trade Fair Palace, and on which I collaborated with Jaroslav Anděl, the then-director of the Collection of Modern and Contemporary Art of the National Gallery in Prague and Ivona Raimanová. In 1997 started the second part of the exhibition project called Lost and Found and i was fully engaged to maintain the program. I was an employee since, I recall, 1996, and I had to more and more divide my energies between Plasy, Prague and Amsterdam, trying to find a way of interconnecting the work I was doing for Prague and for Plasy. But the institutions and my involvement were incompatible. Anděl’s attempts at reorganizing and animating the National Gallery became a target of criticism in the media, and I played an unwilling part in this power struggle.

Inquiry into something basic in a human’s life and art, into myths about the origin of the human and the world, were mainly addressed in the conception and realization of the catalogue. The topic of “origin” was linked to the exhibition conceived by Igor Hlavinka, rather than to the symposium as such. The structure of the project was conceived as a quest for various forms and models of individual and social cooperation (or at least those were our intentions). Artists working as part of the symposium were selected (or supported) especially by a few institutional partners whom I had approached. These were the Surge gallery in Tokio (curator Christophe Charles), the Soros Center for Contemporary Art in Tallin (director Sirje Helme), in Budapest (director Miklos Peternak) and Sarajevo, where it was founded the very same year (I got the contacts from Ludvík Hlaváček). The main change for the Center for Metamedia came from a grant promissed by the Swiss cultural foundation Pro Helvetia, and was made accessible to us through Iren Stehli. It was also the last symposium and (mini)festival for the opening which received friendly, or at least neutral, treatment from the side of the site’s keepers and the National Heritage Department in Pilsen. The exhibition took place mainly in the silo, the concerts at the opening after the symposium in the convent. Jo Williams, whom I had met in the National Gallery, started helping on the production.

The project was organized in close cooperation with the Monument Institute of the Czech Republic and the management of The Plasy Monastery National Monument.

Design for the catalogue and selection of texts: Miloš Vojtěchovský, Igor Hlavinka

Center for Metamedia-Plasy is an international, interdisciplinary artist residency and project program established in 1992 on the grounds of the former monastery in Plasy, Western Bohemia. Over 400 artists from many parts of the world have participated in the Center's programs which range from independent studies or project-based residencies for visual and performing artists, scholars, curators, and students to exhibitions, performances, symposiums, workshops and other events. The Center's archive and library are open to the public. Catalogues were published by the Center for each symposium since 1992, and were, in some cases, supplemented by music recordings.

Media and Resources: Overview
Athanasius Kircher: Sunflower Clock: biological time
Meanders, Paintings and the Forest: On the Idea of the First Painting

Catalog – Near the Beginning – 75Mb 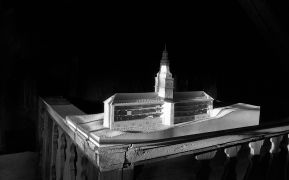