Shuji Mizutome: Star on the Egg

"A religious soul sublimated the dark and created a sacred space where fire was kindled on the candelabra. The complex flame burning softly in the dark set itself in the Middle darkness. When he began to see the calm and placid cosmos with his eyes closed, he had to fuse himself with darkness and face himself. There, his monologue began. There, clear and transparent, time was created for meditation. The next step was taken by the scientific mind; it discovered light in electric vibration after it discovered burning light. The light which was detected by scientists had within itself the power to reign over darkness. Scientific radicalism sought the invisible from every angle and aspect, trying to break down the world into bits of revelation.

Consequently, this light that revealed reached and grasped the ultimate particle-atomic nucleus. However, at this point there occurred an astounding leap - the lightening of Hiroshima. It was meant to put an end to the war. It was, however as powerful as God's light: the former domineered in destruction, while the latter in creation. For the cellar of this former medieval monastery, I chose as my theme the light of a third kind, and the title "Picca or Lightening“ I borrowed from its colloquial usage.

Firstly through archaeological meditation and microcosmic imagination, I tried to survey the initial point of the Lightening so that I might picture what had happened at that moment. Innumerable creatures and living things were bathed in the Lightening. The smaller they were, the sooner they vanished in the high temperature. On transparent glass fragments, I put figures of a pregnant woman, fetuses, embryos, eggs, sperm. Onto these figures I devised to project the eyes of all anima and souls that had been breathing before the bomb.

Absorbing the energy from the light invented by science, the living figures were enlarged and projected onto the dark cellar's walls. The maximum current of light and infinite glances, looks, and stars must have added another level of significance to this history of death, brought about by the ultimate light of science.

The Atomic Dome or an open planetarium of steel frame, is in obvious accusation of the Stars and Stripes. Onto star-shaped pieces of cotton cloth, each living thing must be scooped up. Those living things that were disappeared and destroyed must be scooped up and placed on those stars. With those spoons of lead. Not only the sculpture of spoons, but buds, leaves, drops of water, tears, music notes, sperm – all these are also spoon-shaped. In this dark space that dates back to medieval times, I wanted to reproduce a shadow of extinction that was originally projected by Lightening. I tried to turn the cellar into a space where religion, science and art dance and ramble about with light." 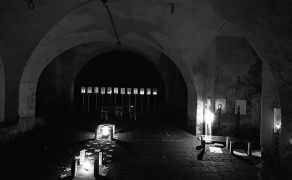 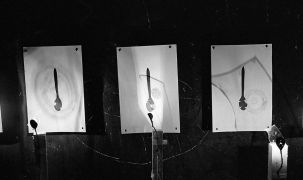 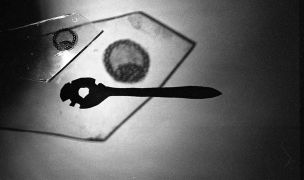