"The Seed" or "The Buckwheat and The Ball" was my response to some discussion about extinct or semi-forgotten crops that used to be common in the Czech lands before the war. The buckwheat is one of them, and the shape of this seed fascinated me. I just do not know where I found this seed when it was not available. I think I wanted to do some serie on this topic, but I did not do this until now when I returned to this theme this year, I'm working currently on the "Burma Seed".
Jiří Plieštik, 2018

Jiří Plieštik (born 1956) is a sculptor, photographer, designer and poet. Between 1981 and 1987 he studied at the Academy of Fine Arts in Prague (studios of Miloš Axman and Stanislav Hanzik). He belongs to the generation of sculptors of the 1980s, and has been a member of the Jazz Section since 1976, as well as a member of the Krásné Nové Stroje (1986) music group. Since the mid-1980s he has participated in the unofficial exhibitions of Confrontation (I., II, III, IV). He works with various materials from plaster through stone, wood, iron, bronze and glass to plastic.

Plieštik's early sculptures from the 1980s are formed under the influence of the current tendency of the Czech grotesque. At the end of the 80s, Plieštik radically changed his sculptor's expression: figures start to be maximally simplified and schematized into the elementary shapes typical for sculptors today. His inspiration was found in ancient cultures, mainly Egypt and the sculpture of the Cyclades.

It was important for him to meet the generationally older sculptor Zdeněk Palcr. Much like Palcr's sculptures, Plieštik's statues are without details, abstracted into simple, loose shapes. The figures are stylized in almost abstract form. In the 90s, he strated creating stalks, swollen columns and sculptures of a specific shape: the inclined figure abstracted from the wavy line.

Plieštik is the author of several public space projects in Olomouc, Prague and New Town in Moravia, and he lives and works in Prague. 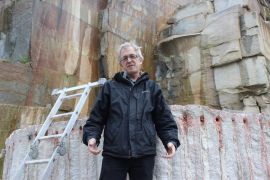