"I discovered musical minimalism at that time - Philip Glass, Robert Fripp, Brian Eno, Steve Reich, and took it with me. We were quite different in Pilsen - piano, guitar, cello, percussion, poetry, spirituality. A chamber atmosphere and a certain intellectualism. We played in Plasy monastery in the chapel of st. Bernard, with Oldřich Janota, Fred Fritz, in Masné krámy, vernissages.
But minimalism works in a certain spiritual context, it was not easy for me one day to play punk with Fire and the next day to meditate in the chapel. I had to decide what to do. While a rock'n'roll man plays and it kicks him into a mood, minimalism can be played by the mood, it's the reverse principle. I do not want to leave it. Fortunately there are two albums "Orvietan" and "SP 1992", the third remaining only as a demo."
Petr Hrabák, 2018
Smíšené pocity played simultaneously with the band Požár mlýna (Fire of the Mill) in 1990-1993. 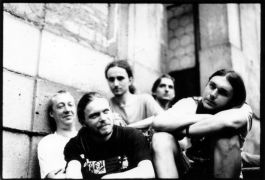