article for the catalogue
Hermit I

The arrangement, the subject and the course of the international work symposium HERMIT, which took place this spring in the former Cistercians Plasy monastery, were affected by several circumstances. First was the genius loci of this remote monastery complex which impressed everybody both by it´s beautiful location in the valley and by it´s extraordinary architecture. If you walk inside the sizeable building of the convent or outside between the church of Assumption of Maria the Virgin, or through the baroque granary with early gothic King´s Chapel, or to the prelature or out-buildings on the bench of the river, everywhere you see that a timeless relaxed atmosphere rules. But the passing of centuries is indicated by the disrepair of the old buildings.

Further was the direction of the HERMIT symposium inspired by very special acoustic qualities of the spaces of the baroque convent. Sonic mirroring in corridors and long echoing in the Chapel of St. Benedict and St. Bernard, accompanied the sound of bells of the tower clock in granary and mixed with ambient sounds of the surrounding composed the unreal tuning of the entire place. This tuning inspired the theme and form of the project. The production of the artifacts and their presentation was not the first goal of symposium. The interrelation of the whole cultural context and environment was essential; the object of art was then only a result of different corresponding events and of forces of the artist and space, relationship between space and sound, discourse of man and environment. In Plasy sculptors, multimedia artists and musicians wet, especially those who are on the boundaries of these art disciplines. Many of them are after the synthetic forms of installation, soundscape or multimedia performance. The organizers were inspired by the work of some artists in particular, for example Terry Fox, The Logos Duo, Hans van Koolvijk, Paul Panhuysen, Thierry de Cordiere and spirituality by the work of John Cage and such modern monks as Thomas Merton. The important role was played by the fact that participants of the symposium spent some period directly in the buildings of the monastery – a location which is remote from the world of art and it´s customs. Therefore, everybody could dedicate his time and energy to find a location, to work on his project and start the discourse with others.

The background of this project is also formed by the contemporary and historical context. The splitting of Europe in two antagonist camps which existed since the end of the thirties, meant the disappearance of the cultural Middle – the position of a melting point which Bohemia held for ages. The former border which is only 100 kilometres from the monastery of Plasy, had not only geographical, competitiveness, nonexistence of dialogue and blocked communication were depriving for both sides of the iron curtain and were a source of many false pictures and prejudices.

One of the main goals of the project Hermit was to restore the mirroring of East and West, the meeting of known and unknown and a crossing of different visions and disciplines. And perhaps to contribute (with small aid) to the new picture of European culture, by opening thoughts and concepts from the areas remote from traditional centres. (Unfortunately an equilibrium between western and eastern parts was not reached. This will be a contribution of the next meeting).

The changing and unsure period of these days poses many questions to every European citizen and specially those who are concerned about the spiritual face of the continent. The experience from recent history drew a lesson which is that total dependence of culture on the state on one side and on the market economy on the other side are dangerous liaisons for the artistic freedom i. e. art as ideological weapon, or art as luxury and leisure.

To see culture as an absolutely private non communicative activity beyond society is another extreme point of view. The tendencies to perceive artistic activity as something superfluous, a decorative or representative of political or economic structures (of certain states), lead to an art that belongs outside of “practical” professions. That way the society may react to art mostly with a combination of suspicion and servility. Because the project Hermit took place in the former monastery – an old spiritual and artistic centre, there occurred, naturally, some important cultural and social relations.

“What is God? He is length, breadth, height and depth.”

The monastery in Plasy – the second centre of Cistercians in Bohemia was founded by King Vladislav II in 1144. At the time he called a group of monks from Bavarian monastery in Lengheim and they started with the construction of the new cloister on the bench of the river Strela.

The Cistercian of the Church and of restitution of original ascetic principals of Christianity. Part of this reform was a condemnation of worldly art as ornament, decoration and luxury, the reform which was connected with a new concept, and a new aesthetic of pure material, clear sound and translucent light. These “minimalistic” ideals of the Cistercian poetic are in the background of the new concept of sacral architecture. The building of many monasteries was a breeding place for Gothic style, lofty cathedrals, lucid chapels and convents. A Cistercians cloister was a place of purgation, silence, contemplation, but also concentrated work (Ora et labora of St. Bernard). There was a harmonic inner space, separated by walls from secular society and from “the wasteland” outside. The monastery should have a function of intermundus – a place which initiates another approach towards time and duration, consisting of laws of periodicity, changing sermons and work, feasts and daily life. Originally the bernardian concept of “closure” aimed at a completely “changed” approach towards human destiny, art, spirituality and nature. The monk could reach salvation only through asceticism, humility and abidance of strict rules of the monastic order and refusal of all worldly goods. Art was under the strong censorship of abbots, and had no higher position than crafts. Nevertheless, Cistercian art was seen as one of the main cultural movements in the Middle Ages and successors of St. Bernard didnt obey his retreat from dignity of the material world to the sphere of

Scholastic and mystical categories. The layman brothers became famous not only as brilliant and sophisticated architects but also as good farmers, artisans, artists and keepers of excellent pharmacies. Even if the utopia of absolute economic autonomy of the monastery failed, it created not only many monumental buildings, cultural goods and art works, but achieved many practical skills and wisdom which serves as resources even day.

Temperance, patience and the sense for transcendency and together with respect towards artistic and artisan work in addition to ascetism (as a means to conquest the ego), these are the values of heritage from monastic history. And in comparison, with the signs of modernity in the near and distant surroundings of the Plasy Monastery, these values keep their relevance.

The heritage of many generations of artists and artisans who worked according the rules of Cistercian order is embodied in the sacral architecture, crafts works, surroundings-buildings and the shape of the landscape as well. The contemporary artist – layman, even without knowing the history or the religious content, has to find some relationship with this heritage.

More than 40 participants of the HERMIT symposium, who came to Plasy from Czechoslovakia, Netherlands, Belgium, Germany, Great Britain, USA and Australia, had task to react to this historical context and to find a personal dialogue with the space. Thus (sometime more, sometime less) a new dimension of the place and a new language was created. New articulation, which transforms the past into present restores the cultural process of discourse. The installation, concerts and performances were linked up with the six centuries old tradition of this monastery as a spiritual, artistic and artisan center.

The phenomenon of monastery, convent and hermitage is connected to the picture of retreat from the crowd, as a reclusive, hiding place of solitude, contemplation and stillness. Int western tradition silence and solitude (as an essential condition of spiritual life, as a dimension of transcendency and insight) was wasting away towards the end of 13th century, when the impact of teaching of Mister Eckhart, Ruysbroek, Angelo de Folinia and other mystic patrons disappeared. Blaise Pascal felt terror from the silence and the emptiness of the heaven and modern men´s first association with silence is death.

The culture which pays the highest honour to stillness and solitude is the philosophy of Tao. In one of his many messages says Lao-Tse: “Retreat from haste and activity. Be silent. Then you can understand Tao.” John Cage in addition to Max Picard or Thomas Meton was one of the authors who restored under by following of Zen and other eastern philosophies, the meaning of silence and solitude in our society. He made silence one of the basic structures of his music and writings. Cage unveiled absolute stillness as the intellectual construction of western rationalism by showing that there is always something which gives tone (even our central nervous system and blood pressure sounds by high and low frequency). The sound universe is outside and inside of our body and beyond our control.

Both Tao and contemporary critical streams in western culture try to change the predominant visuality which rules our perception of the world by ridding us of the anthropocentric illusion. To place man in the center of the universe, is far beyond his possibility and responsibility. Centrist and egocentricity men take off the world all the soft turmoils of sounds and events in order to proclaim the silence as the absence of sound. Stillness sounds with silence. Pollution of human noises. Listening means compassion. Looking means distance.

Deaf handsome Narcis looking on his (beautiful?) image refused the musical nymph Echo and she keeps wandering over the landscape in desolation and reverberation.

The Convent of Plasy sounds with many hidden tones. The building is standing on the underwater forest. The basement is erected on 5100 wooden pillars and water streams slowly under the building. Jan Blažej Santini was an architect whose work was in harmony with old Cistercian concept of sacred architecture as symbolic, intelligible level of reality, as well tuned instrument of resonance. Such buildings we can find in books of famous universalistic scientist and artist of Baroque period – Athanasius Kircher.

Recently the convent sounded with dissonant and harmonic chords. The experience of the whole event of Hermit meeting suggest that there is not only single absolute harmony. Harmony consists of amalgamation of many different sounds, objects, words, thoughts and attitudes. The environment which results from an old attempt to reach the harmony and to be in harmony, can be a good place for trying to find new insight (in the self and for listening to others). Then may the echo of harmony be audible outside the walls of the convent. 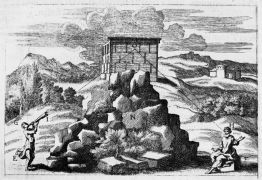