The Horologe of Dreamers: Untitled

"Over the last two years, the members of this orchestra selectively found and collected various metal pieces (nails, sticks etc.) to construct this Horologe of Dreamers. Three or more musicians play this technical, medieval, variable sound installation. It was played twice in Plasy, both times at sundown, an ideal time for it's sound. Sound of the clock, striking the ancient time of Dreamland."

The Horologe of Dreamers, 1992

from The History of the Horologe:

One day, a clinking sound of a "Šumava Mountain Jingler" emerges out of a maze of cackling, chirping, barking and meowing, as an invention by JK during his vacation in Mačice, a quiet village in the Šumava Mountains in southern Bohemia. It takes years for JK and another dreamer, his brother Michael, to refine the instrument and to bring it to its final form by working patiently on selecting the right metal components: poles, nails, rods, plates etc. This somewhat peculiar installation is introduced as "The Horologe of Dreamers" and its first performance is scheduled for the opening of an exhibiton of "In the Dimensions of Emptiness" on March 18th, 1992 in the Museum of National History in the Moravian town of Olomouc. A third dreamer, Marek Sebelka, participates in the project. The original setup of the three musicians goes through various changes. The brothers Kořán's Duo, as the core of the group, stays the longest, as well as the solo performer JK. But gradually, the group merges with the FOOD musicians. At first, a trio is formed, made up of JK, Tereza Roglová (vocals) and Richard Horký (cello), later Roman Plischke (guitar) joins the group, followed by Michal Delia and singer and percussionist Milli Janatková. 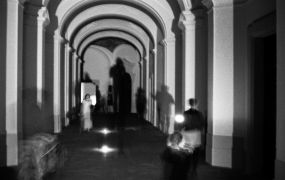 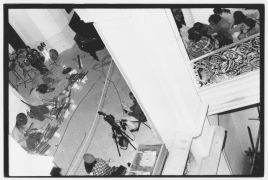