Miloš Sejn: An Immediate Space / The Space of Memories II

"For several hours, I am closed off in a small decrepit room, adjacent to the corridors surrounding a paradisiacal courtyard in the Plasy monastery. I am collecting pieces of peeling plaster, I mix them with water and within a stripe on the floor I am building a two-part installation of twelve steel bowls, gradually filling them with this material. I throw the contents on the walls in twelve gestures and by twelve vertical strokes I divide the walls visually. My activities can be seen only through a keyhole in the door,  sonicly, they are captured by contact microphones and are audible outside the clausure. The sound is transmitted via echomodule to the entire space of the corridors.
Technical assistance was provided by Aleš Müller."
Miloš Šejn, Hermit catalogue 1992
"The first work performed in a building of The Plasy Cistercian Convent was Low Singing, realized April 28/1992. I worked here with the groundwater-level of a static construction system in this building and with seventeen stainless dishes. Sixteen of them I used for the festival performance on June 20th, 1992. Within all the works, I was observing a parallelism of the convent's visual and sonic changes and division of itself. I chose a destroyed room next to the st. Bernard's chapel. The denuded earth of the pulled out floor reminded me of a field; a fresco remains on the walls as shadows of the last building life.
I had arranged 16 dishes, eight in parallel in the room and I filled these step by step with water and with earth and with brick dust of this place. This pigmented liquid I afterwards splashed on the walls and then scraped the damp plaster on the walls with each dish. This plaster material I spilled to the middle of the room. A network of sixteen vertical and one horizontal line arose.
The room where I performed had been closed and spectators were able to observe only a picture similar to the perspective construction of the cinematic picture. However, because the noise from the place of my performance had been sampled and transferred outside into the opposite corners of the convent gallery (the space of spectators), the spectators were able to perceive increased and re-echoed deformed fragments of my activity as a rolling flow inside the whole building. While I heard and perceived only my place and myself.
I was very interested in this duplicity of identically receptivity as well as its unity, realized as a mutual energy for both myself and the spectators at the same time. This particular realization at the Plasy Convent had special importance for me, different from the experience that I had acquired by making a similar performance at Spacio Ansaldo in Milano in 1991.
The effect of the magic mirroring of one and the same thing contains somehow already this Baroque building by Santini. Here, man can perceive at the same time the murmuring of the underground water and the whistle of the swifts beyond the windows."
Miloš Šejn, Hermit catalogue, 1992

Miloš Šejn (born 1947, Jablonec nad Nisou) graduated from the Faculty of Humanities of Charles University in Prague in 1975 (Art – Doc. Zdeněk Sýkora, Art history and Aesthetics – prof. Petr Wittlich, Doc. Miloš Jůzl). In 1976, he received his Doctorate of Philosophy, and in 1991 he was appointed as professor of painting. Between 1990 and 2011, he worked as a teacher in the intermediate studio at the Academy of Fine Arts in Prague, and as a guest teacher at the academies of Aix-en-Provence, Carrara, The Hague, Ljubljana, Reykjavik, Stuttgart and Vienna.
Miloš Šejn works across the fields of visual arts and performance, addressing issues of visual perception. He organizes workshops, such as Bohemiæ Rosa. His artistic conceptions were shaped during his youth, when he undertook a number of journeys through the wilderness as a form of reflection on an inner need to get closer to the secrets of nature and to watch the miracles which take place firsthand. Since the early sixties of the twentieth century, he has been journeying and photographing, drawing, collecting and describing his observations of nature. He currently focuses on the immediate creative possibilities of addresing the relationship of humanized landscapes and intact nature. Consciously, the artist has woven his work between expressive language and text, visual tracks, body movement, voice and expansion into space. One of his recent large realizations is The Mountain of Dreams, made in cooperation with the project Sluňákov House of Nature in Litovelské Pomoraví.
Miloš Šejn participated in the first Hermit Symposium in Plasy in 1992, in 1994 in the symposium Hermit III: Transparent Messenger, in the same year he participated in the international meeting Fungus: Inquiry of Place (1145–1995), in 1997, the international workshop for artists and dancers Bohemiæ Rosa was held at the Plasy monastery. Along with the Dutch dancer Frank van de Ven, the video of their dance project for Plasy (Dancing Plasy Times 8, Rolf Meesters, Miloš Šejn, 1997) was recorded. 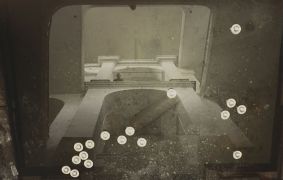 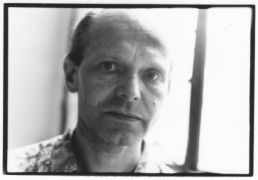 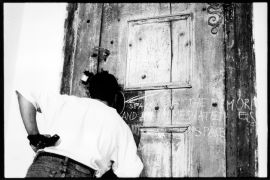