"C.O.I.L. is a work in progress from four artists who came and worked in the monastery over the last two weeks in June. It is based on a story from Italo Calvino's 'Invisible Cities' which tells of people looking for an ideal, an image captured in a dream.
The performance talks about being caught in one's own desires and illusions. So much energy - with no ending. Dancers fall into attitudes, states of mind to break and move through the space, to yet fall once again into the attitude and state which they had left before. Dreams fell one's dreams, wrapped one upon another.
The audience is free to move around the space as a piece changes directions and places, and cannot be viewed from any one point in the room."
Kristine Deray (Australia), 1992

C.O.I.L. collaborated with Horst Rickels and Victor Wentink who composed music for one of the performances in the Metternich Hall.
(So far, there has been no other trace of Kristine Deray on the internet). 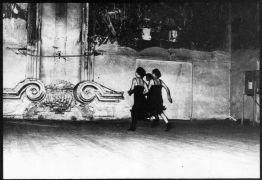 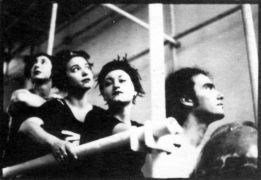