Why do they not manage, as we?

Attila Kotányi (born September 18, 1924 in Hungary) was a poet, philosopher, writer and architect-urbanist. In his early years in Budapest, Kotányi belonged to the intellectual circle of philosopher Lajos Szabó and Béla Hamvas, Kotanyi joined the SI in the Spring of 1960, and was excluded in 1963 for his alleged “Christian mysticism”. Died october 18, 2003 in Germany.

I could not find any record of the lecture, or summary.

After the communist take-over, roughly from 1946 until his emigration in 1957, Kotányi was part of a close circle of dissident intellectuals, called in some places the “Budapest Dialogical School”, lead by Lajos Szabó and Béla Tábor. Mostly due to the total political-cultural isolation characteristic of the times, this group, consecrated to dialogical philosophising, operated exclusively on a theoretical level without the slightest hope of outreach towards society. Starting out of the Marxist, counsel-communist and the (much less relevant) anarchist fermentation in Budapest of the 1910s and 20s (Lukács and his circle), they reached radical idealism by the 30s.

This radical idealism, among other things, embraced the dialogical thinking of Ferdinand Ebner, Martin Buber and Stefan Rosenzweig, essentialist sciences as mathematics or physics, and the study of gnosis and Kabala. Szabó and Tábor advocated total abstinence from public activity; against the “watery claims of unity of theory and praxis” they stood for the uncompromising primacy of theory, meaningfully criticising all the currently available, “cutting-edge” spiritual tendencies from Marxism to sociology, Positivism, psychoanalysis and the existentialist thinkers alike (see their co-authored pamphlet Vádirat a Szellem ellen – “Indictment Against the Spirit” – of 1936).

As a member of the Situationist International he formed the program, and was the head of the Bureau of Unitary Urbanism, a member of the editorial committee of the French IS bulletin, was involved in the discussions about the conceptual direction of the SI, as well as a signatory to important manifestoes of the movement, most significantly the great text written on the Paris Commune. Despite all the engagement and activity, his name rarely appears in the vast post-Situationist literature and his contribution to the Situationist heritage has virtually never been analyzed. At most, he has been remembered for his harsh exclusion from the SI, which he called at the time the result of a “regrettable misunderstanding”. The speculations below are an attempt to explore the depths and range of this “misunderstanding”.

The story begins in 1960 when Kotányi, then living in Bruxelles, Belgium, got into contact with Guy Debord. He had just left behind a deeply depressing period caused by the shock of emigration (Raoul Vaneigem remembers that Attila, a life-long nonconformist, wore a tie all the time that they were forced to spend in the emigrants’ camp in Yugoslavia, choosing this pathetic bourgeois symbol to keep up the appearance of humanity in inhuman conditions), the violent split with his philosophical master Lajos Szabó and the serious existential troubles that surrounded him and his family of four. As an authoritative figure with a thorough philosophical education as well as experience of a real revolution – the 56 revolution in Hungary – behind him, he gained Debord's trust and was welcome and appreciated among the younger situationists.

He started publishing in the French SI bulletin, became a member of the editorial committee and worked in that position for four successive issues. In the summer of 1963, apparently out of the blue, he submitted a proposal to his comrades with the outline of a radical reorientation for the movement. The text and his persona was “unanimously” accused of mysticism by the situationists and as a consequence, he got expelled from the SI in September of the same year in what was, compared to the few prior and countless successive exclusions, the most orchestrated effort of the SI to provide a bloody exemplum to the outside world of the ideological firmness, purity and cruelty of the movement.
Kotányi does not reconcile himself to these events for the rest of his life. In Amor Fati, a biographical documentary made by his younger daughter Sophie Kotányi at the turn of the millennium, he calls Debord an “infantile, idiotic corpse, a fascist, an Eichmann”. Guy Debord on the other hand seems to be more forgiving: he placed (a somewhat scared looking) portrait of Attila in his 1978 film In girum imus nocte et consumimur igni, accompanied by implicitly self-critical, elegiac sentences mourning for lost fights and lost companions.

At the time Attila joined the IS, the group was at the beginning of the process of self-bureaucratization, and a lot was still proceeding on an informal basis. Attila throughout his life had a “good nose” to smell where important things were happening. Intrigued by some texts he had happened to read, he went straight to Paris and knocked on Debord's door. A strange friendship would develop whose psychology susceptibly had an important role in how things for Attila would evolve.

In this sense, they were way more radical in their overall critique already in the 30s than the situationists who tried to safeguard the revolutionary fervor of young Marx and advocated the obscure conception of “theory in praxis”. At the same time, the radicality of Szabó, uncompromised in its self-inflicted withdrawal from the “spectacle”, confined to the dialogue of a limited number of people, also saved him and his circle from “speaking the language of the spectacle” - a compulsion that critical intention imposes on us, as mentioned by Debord in the Society of the Spectacle.

He contributed a number of seminal essays to the SI journal, including “Gangland and Philosophy,” 1961, “Basic Program of the Bureau of Unitary Urbanism,” 1961, co-authored with Raoul Vaneigem, and the most famous, “Theses on the Commune,” on which he collaborated in 1962 with Debord and Vangeiem.

Kotányi then relocated to Germany, where he taught for over a decade at the Dusseldorf Art Academy. During this period he continued to write political and philosophical essays, as well as poetry, and he developed small architectural projects and painted. In the 1990s he returned to Budapest, where he became a central figure in the intellectual life of the city. He elaborated his Sabbath theory, a call for a radical suspension of activity. A circle of students and young intellectuals gathered around him during these final years. He died in Düsseldorf in 2003. 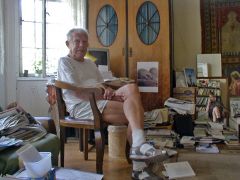 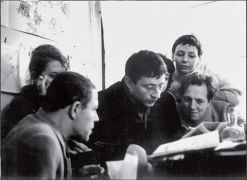 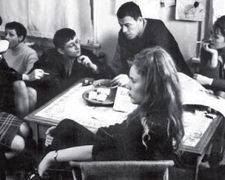