Miloš Vojtěchovský: The audio art in Holland and The Tonality Czech Visual art

The audio art in Holland

Hollan dis a place where so called audio or sound art has a short but important tradition and many artists and several institutions are concerned specially in this multimedia genre. Since 1960 a growing number of attempts to make music with space and colour have received international recognition.
The Fluxus influence can be be detected in the frequent anti-art element and irony, together with major signifikance of John Cage.

The pioneer of the electronic music in Holland – Dick Raaijmakers has had an enormous influence on many areas of art specially on the field of audio art. In 1967 he paved the way for the live use of electronic and he was also involved with the inception of the Foundation for Electro-Instrumental Music (STEIM) in Amsterdam. The aim of this foundation was the development of electronic instruments that can be used live at concerts and in theatres. STEIM i salso still a laboratory for composers, an educational organisation and a facilities centre for advice, sound recording and for the renting of equipment. The former director Michael Waisvisz set up in 1960 with Misha Mengelberg and Willem Breuker (both freak jazz muscians) the „Instant Composers Festival“ (I.C.P.) and was one of the organisers of the famous „Claxon Sound Festival“.

His own work consisted of what he later called the „Crack Instrument Project“. On the basis of this idea Waisvisz constructed crack boxes, mini crackers, the case crackers and many other different sound objects. One of this later was called „The Hands“ – alluminium constructions that look like oven gloves and are attached to the players hands. Sensors in the Hands ensure that movement of the fingers, hands and arms are translated into a series of strčit instructions to a computer sound system.

In amsterdam are beside the „Steim“ also other institutions which pay frequently atention to sound installations and audio Art. „Ears and Eyes- Who listens, sees“ was a credo which inspired the first „So und So und So“ audio festival in 1985. The last festival in 1998 (Holland Audio Art) organised by „Het Stichting Time Based Arts“ and „Het Shaffy Theater“, presented many Dutch artists who have been seminal influence over the last decade. Sound installation find their way also in the space of Stedelijk Museum in Amsterdam (the exhibition  „energieen“) or in the Gemeentemuseum in Hague.

The „Apollohuis“ in Eindhoven directed by Paul and Helen Panhuysen (formerly together with visuals artist and composer Remco Scha) was very important for many multimedia projects in Holland. „Het Apollohuis“ provided last 15 years a forum for visual art, music and performance and nortured countless sound sculptures and installations. In 1984 and 1985 there was held the „ECHO Festival“ where were presented many famous European and American sound artists and were edited publications which contain a general survey of the development of sound art and a bibliography of the literature, records and cassets, that have been published in the field of sound or audio art. Paul Panhyusen, who colaborated with meny artists all around the world, has achieved international fame by suspending installations of musical long strings which produce oceans of harmonics. His String installations and other works represents a „personal attempt at a synthesis of various disciplines, encopassing aspects of sculptures, architecture, improvisation, interderminancy and music composition“.

In Eindhoven also worked, among many others, sound artists Horst Rickels, RIck van Iersel and Joop van Brakel on a multi-media project „The Simulated Wood“. THis was a combination of visual art, literature and music, played on self made instruments. Each of these artists continues today to work on their new solo projects, based on the exploring of the universum of the sounds and construction of new string, percussion and brass instruments.

Hans van Koolwijk builds in Amsterdam enormous music installations – pipe organs using as materiál the bambu wood and creating real land-scapes of harmony between this natural materiál and space. From a different technological point of view constructs Ad van Buuren from den Bosch his mechanical „Dynamic panoramaphon“ using the systém of reel recorders and transforming the tiny sounds of simple instruments into a musical and visual interno.

These are only few names from the wide spectrum of the sound and audio art in Holland and many interesting artists are not mentioned. But there is enough literature about this issue and the archives of the Apollohuis and The International Audio Art Proejct in Anhern ort he Vleeshal exhibition center in Midelburg can give a more complete picture.

The technological approach is typical for many Dutch sounds artists and this is probably corresponding with the general development of the contemporary music and visual arts in Holland. Some institutions and festivals are entirely dedicated to the integration of several disciplines in art, and sound art has together with video art a stable position as a new complex language there. Paul Panhuysen wrote in his contribution to the book „The Images of Sound“: „ Removing the boundarries of the media an amalgamation of artistic disciplinares are necessary in order to learn once again to grasp the cohesion that exists in the world. Sound art explifies this struggle.

The Tonality of Czech Visual Art 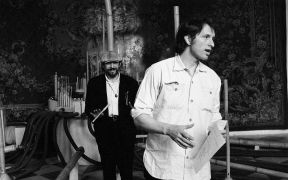