The British collective Mongrel inverted the paradigm Hanley describes with their 1998 Macintosh game, BlackLash. Instead of making black characters bear the brunt of physical violence, the game features a black protagonist doling out the attacks against a variety of antiblack aggressors. BlackLash finds the slippage between the “hood” and the “information superhighway,” excavating the market-driven stereotyping of blackness in gaming and virtuality to “battle the forces of evil that plot to convict or eliminate you from the streets.”

Mongrel (1995-2008) were the combined socially engaged cultural practices and products of Richard-Pierre-Davis, Mervin Jarman, Graham Harwood and Matsuko Yokokoji. Mongrel was a mixed bunch of people and machines that make socially engaged cultural products employing any and all technological advantages they can lay their hands on. Part of their collaborative project was learning to program, engineer and build their own software and custom hardware. Mongrel has created collaborative, socially engaged cultural products including National Heritage and the Natural Selection search engine to international acclaim. In 1999, Harwood/Mongrel received two national awards, The Clarks Digital Bursary and the Imaginaria Award from which emerged the software Linker - exhibited at the Institute of Contemporary Art and Watershed Bristol.

Graham Harwood and Matsuko Yokokoji, formed in 1994 YoHa (English translation 'aftermath'), YoHa's graphic vision and technical tinkering, has powered several celebrated collaborations, establishing an international reputation for pioneering critical arts projects. Harwood and Yokokoji established as well the MediaShed - a free-media lab (2005-2008). In 2008 they joined Richard Wright to produce Tantalum Memorial shown in nine countries and 15 cities over four years. In 2010 YoHa produced Coal Fired Computers before embarking on a series of works about the lived logics of database machinery including Invisible Airs (2011) and Endless War (2012). 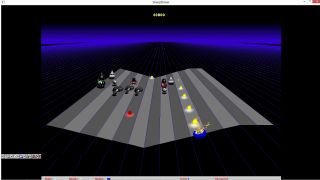