Plasy Monastery
Duro is performance artist born as Djuro Grdinič in 1960 Bjelovar Yugoslavia. While growing up in Zagreb played football, finished elementary school and gymnasium, dropped out of geography studies, joined blacklisted anti-communist performance group Hubald, escaped army conscription...and via Prague (1984-85), West Berlin (1985-86), Paris (1986-88) and London (1988-89) was living and working in Amsterdam since 1989, since 2000 living and workin in Hvar, Croatia (project Artfarm PA). From 1996-2007 he performed on the streets across Europe as illegal immigrant that never had to wash the dishes. He ultimately created cult street performance on Rembrandtplein in Amsterdam. In 2002 he graduated from Dasarts, postgraduate art studies (MA) in Amsterdam.

He is co-founder/programmer of AWA (Artists with Attitude), artists initiative/gallery in OT301 in Amsterdam. "Questioning the classic role of the artist, the "object" and the spectator. Removing the dominant role of the artist by transferring the production process to an independent engine that can be operated by anyone. Resulting in the animation of the inert property of "sculpture", in real motion, real time and real space. The work of art thus becomes more and more a part of the viewer’s consciousness; unique in its moment in time.

Work has evident elements of humor and playfulness, while after closer look a more serious undertone emerges. The work poses not only critical questions about art and the art market, also addressing issues beyond the art world. For example, by allowing work to deteriorate or even destroy itself, questioning the sanctity of art, and in a broader sense stressing the notion of change and decay embedded in all processes. Bringing works to the public instead of bringing the public to the work, empowering the public to move beyond its role as viewer."

He became famous in Czech media because he was sent back from the Czech borders in 2000 comming for the Performance festival, which was taking place in Prague during the IMF summit. The reason was the colour of his hair: blue.
Since 2000 is living and working back in Croata in Hvar, where he created project Artfarm PA.

Barbara de Groot was part of the Subtheater

Gerindo Kamid Kartadinata (born in Germany), finished his study at the Mimeschool Amsterdam in 1997 and worked since then with theatermakers like Ola Maafalani, Karina Holla, Bambie, Noel Fischer, Duro Toomato and Luc Boyer. After making several performances based on the work of Daniil Charms, „Charms“ is the final result of his research about this Russian absurdist. 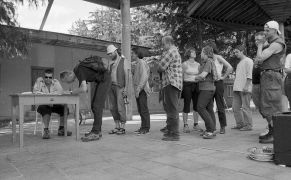 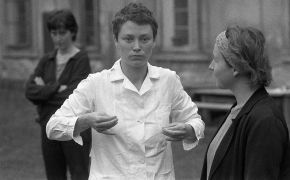 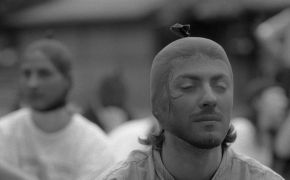 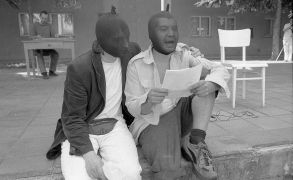 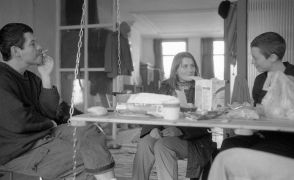