The word Limbo is of Teutonic origin, meaning “border” or “anything joined on". The concept of limbo probably developed in Europe in the Middle Ages but was never defined as a church dogma, and reference to it was omitted from the official catechism of the church that was issued in 1992.
Two distinct kinds of limbo have been supposed to exist: the limbus patrum (“fathers’ limbo”), which is the place where the Old Testament saints were thought to be confined until they were liberated by Christ in his descent into hell, and the limbus infantum, or limbus puerorum (“children’s limbo”), which is the abode of those who have died without actual sin but whose original sin has not been washed away by baptism. Traditionally, this “children’s limbo” included not only dead unbaptized infants but also the mentally impaired.

Festival Limbo I was a three-day cross-cultural and multi-genre event open to the public on the grounds of the Plasy Monastery. The festival program provided of a mixture of traditional and experimental music, theater and performance with scheduled concerts, puppet theater, movement theater, video showings, and outdoor movies, as well as a "workshop space" for improvisation among the participating performers.
Twenty-nine performances were held by solo artists and ensembles from Germany, Austria, France, Czech Republic, the Netherlands, USA, and Australia – over 100 performers in total. Genres as various as electronic music, puppet theater, Russian folk songs, acrobatic movement theater, Chinese opera, traditional tamburizza music were held on the grounds of the former monastery.

The all-day video program by Terminal Bar included selections for children and adults of short and feature-length animated, classic, underground, documentary, silent, and art films. Night-time outdoor movies were projected within the prelature courtyard. The aim was to enliven the activities of the Plasy Monastery with an event that harked back to various traditions of summer festivals and forward to contemporary forms of artistic celebration from a multitude of cultural sources.

Limbo I. Festival was organized by the Center for Metamedia in collaboration with mamapapa, Terminal Bar, Skleněná louka and under the patronage of the town of Plasy and in cooperation with the Historical Monument Institute of Plzeń and the management of the Plasy Monastery. 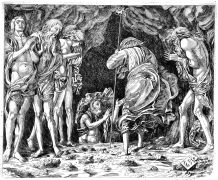