For me, coming to Plasy is connected with a long-time interest in Bohemia and Moravia. My introduction to this region of the world was by way of motor sport in the early 1960s. It may be of interest to briefly trace back little further. My childhood was spent in industrial cities in the USA and I became interested in art and motorcycle racing almost simultaneously during my teenage years. I raced motorcycles tu support my art-making, and one of sponsors was the importer of the Czech Jawa and CZ brands.
Because of communism, this of course meant I was sponsored by Czekoslovakia. Most of the employees of the importing company in Nwe York City were Czech, and because I visited them often. I gained an interest in their culture and history. I learned about their motor industry and its products. Like most artists, I am drawn to museum of art, architectural monuments, and the many cultural masterpieces the Czech republic is so well known for. I am also drawn to „sacred“ cities as Mladá Boleslav, Strakonice, and Brno.
These are all places where industrial families were born. New industrial aristocracies have since complete with the old nobility for power. Knowing industrial historie sis important as global corporations absorb cultural indetities and re-present them to suit their profit agenda. Our realitonship to space and place have changed considerably during the insdustrial age. We now reside in a virtual world where mechnisms have been replaced by Electronics.
Our past attempts to understand and describe space in physical terms have become less useful as we shift to this expanding psychological space. Interiors appear larger than exteriors as the natural is increasingly mediated and compressed. With this in mind, my project for Plasy has been to make rubbings of objects found in the area.
These images are joined in a long time-line without regard for their cultural or monetary significance. The objects used are as disparate as a TV. A guitar, a book listing notable Czechoslovakia from 1927, parts from a Škoda car, a chair from the Metamedia Center, a cucumber and a toy gun.
I´m exploring the relationships between objects and space, public and private through the use of graphite frottage on paper, and through the casting of plaster. I have used such as televisions, car parts, and guns, potential icons in our commodity = oriented culture. These obejcts play important role joined as a matrix and used as casts for sculptures with recorded „missing“ images.

Statement: Crashing Into the Future Coming Back at You Imagine sliding secretly into the future, quickly taking a sample and slipping unnoticed back into the present. Whether one imagines the paradox of the fireman’s role in Bradbury’s Farenheit 451 or the totalitarian regime orchestrating the outcome of serious play in The Hunger Games, pictures of the future are culturally ubiquitous. But what if that future could come crashing back at you without a moments notice? What if the future was already present now? A basic law of physics says that all the world’s matter has already been created and that our experience on the physical plane is just a continuing reconfiguration of matter, molecules and atoms, ever in flux. Quite literally, the plastic bottle was once crude oil and in the future, if all goes well, it will be recycled into lawn chairs to be sold at a tony house and garden shop. It is even more likely to become landfill, destined to a seemingly endless future of the million or so years it will take for nature to break the plastic down. This is all easy to imagine when dealing with the physical world of stuff, but on the atomic scale, this reality becomes rather cosmic welcoming a more esoteric world. In other words, it yields a sort of now you see it now you don’t quality. There is a spectacular relationship between these two worlds, the seen and the unseen. To put this in the most basis terms, there is land and there is sky. The land, a collection of earth and sea, mountains and desert, farmland and cities. Some is beautiful and pristine, some destroyed and squalid. With the grim honesty of a mirror, the sky reflects the topography adding appropriate sunshine, cloud cover, jet stream, weather patterns, pollution, and resounding evidence that there is a physical land ever over managed by humankind. The sky includes radio signals, microwaves, wifi, and all the apparatus necessary to make it possible to communicate instantly with another residing on the other side of the globe. Beyond the sky, unfolds an unseen reality of crystalline beauty. According to Marshall McLuhan, “Our permanent address is tomorrow.” It is the future that most matters. He also expressed his concern for our future when he queried, how many bits of information will it take to leave millions of the earth’s inhabitants dead? Whether one ponders physical space or technological wonders, perhaps it is this relationship between seen and unseen, and memory and future that most fascinates.

Dan Devine earned his MFA from Bard College in 1988. He has had many solo exhibitions, including at Incident Report, Hudson, NY; The Fields Sculpture Park, Ghent, NY; Pierogi Gallery, Brooklyn, NY; Helen Shlien Gallery, Boston, MA. He has also been included in group shows at Thompson Giroux Gallery, Chatham, NY; Western Exhibitions, Detroit, MI; Brooklyn Museum, Brooklyn, NY; among many others. He is represented by Thompson Giroux Gallery and currently teaches at Hofstra University. 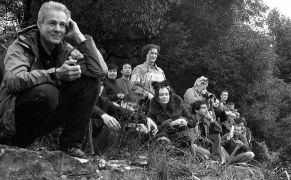 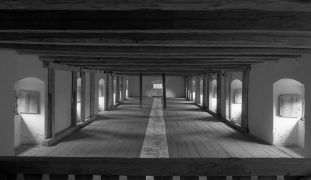