Jacques Roch: The Dream of the Unicorn

This piece is divided in two: a video animation of 3 min, and installation of seven paintings on muslin (96 x 56 inches) set inside the windows of the concert hall in the prelature building. It consists of a video of animated drawings relating to the metamorphosis of a teenage girl into a unicorn. The tension between her virginity, paradoxically symbolized by this fabulous horse, and the awakening of her sexuality creates a violent merger of lines and forms, leading to a crisis of unexpected ending.
La Chute (The Wall)
By Jacques Roch
Will we finally know what is beneath the skirt of the fairy?
Some people say she has the legs of an ostrich…
Once upon a time in Paris, before the Algerian war
She had a hotel room under the roofs in Saint Germain des Pré.
In the metro, the first twenty minutes had been fine,
And I had just a few stations to go.
I thought of the Indian summer in New York… the loft and my bed wigged by now.
It must have been transformed by my cats into a hairy carpet.
In the crowded metro across from my seat.
Girls were chirping and kissing their lovers in front of a rueful audience.
I suddenly remembered that birthday party when you cut the cake,
And all the flies flew away. My heart was pumping like the knees of the race biker.
When I finally reached the door of her hotel,
The condom that I had been wearing all the time
Fell inside my pants and crept on my right ankle.
---
I am sorry to say that the poet won´t give a lecture: the dog has eaten his denture. His nose is now a perk croaking some jokes, and we can see between his sneakers his hands clutching a bottle of wine. Ah! From the depths of his armpits, a cluster of goat-cheese is raining down on the grass in front of the prelature where the girls of West Bohemian stretch and dream in the sun, while the endless first step of the fairy goes on…
Jacques Roch, 1999 Plasy

Jacques Roch (1934 - 2015) was French visual artst living in USA since...   Starting his career as a painter in the early 1970’s in Paris, Roch later turned to producing comic strips for the magazines Hara-Kiri and Charlie. But after meeting American artist Pamela Wye, whose he married and followed to New York City, he returned to painting in 1980.
An exquisite draftsman, Roch seldom emphasizes drawing in his paintings, relying instead on repetitive imagery applied through silkscreen - a procedure that lessens the importance of the figures while highlighting the color-field ground. The silkscreened vignettes combine strange anthropomorphic creatures and cartoon versions of personages from master paintings such as Delacroix’s Liberty Leading the People, Fuseli’s The Nightmare, and Much’s The Scream - references all brought together in this exhibition. Typical of his deflation of grand narratives is a work that shows Titan’s Adonis holding a cell phone instead of a weapon while Venus grabs his hand, persuading him to join her for a walk, rather than going to hunt.
Nihilist inclinations are often offset by absurdity in this body of work. With their bright colors and mechanical, mildly cynical figuration, the paintings engage in a delicate balancing act - one in which quiet despair, while never absent, is routinely overcome by the possibility of delight.
Denise Carvalho, 2008 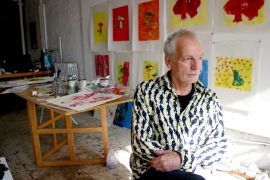 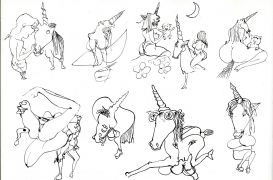