The decision to demystify a work of art made us create something which would be a result of a meditative process transferred from one place to another; a presentation of an artist´s spirit incarnated with no physical presence at the very place where that existence is physically absent. The artist´s message is delivered as stamps or labels of time. Reality grows from the capability of being given to another artist and to totally disappear in his or her reality. Thus, the whole process happens as a child´s game, being immediate and without a considered aim. Time and space interpreted as a metaphysical category create a complex set of circumstances regarding the idea as well as the form. So, the most important part of the process is the focus. The total energy is comprised, allowing a connection and building of the process while experimenting with meanings and forms, depending on the level of their existence in the defined space and time. Playing with the content of the title in the telephone (audio), and through email (visual-textual), we tried to experience the content through the triviality of a particular moment. These trivial conversations used in the story we called NON POST LIST. We developed it through exchanging concrete emotional experiences and happenings at particular moments in two different environments (Macedonia and Czech Republic), turning the experiences into an intuitive union of communicated energies. We tried to keep the whole idea free from beginnings and endings, maintaining ourselves from the first impulses while focusing on creating something free from final results. Throughout the experience we knew that our actions and ideas would require energy, and energy is always shared, and that all human experiences are sublimated in each final result. This experimental approach dealing with concrete and abstract sense of space and time, while mixing imagined with actual ordinary situations were the main considerations for the installation. Also, part of it were words, agendas, sheets of paper depicting hand-prints, and small lights. The artist in Macedonia scanned and faxed her handprints to be placed by the artists in the Czech Republic. That way, the artist who was in Macedonia was stamping her existence, for it to be represented by the other artist. Four appointment books bought in a shop Plasy, representing the immediate consumption of a ready-made object, became the depository place for the handprints of another artist who was geographically far and unable to get a response in relation to its creation. The artist in the Czech Republic sets immediate consumption against the other artist´s originally and presentation, in order to exclude authorship from the work of art. The place and intention of the piece are not precisely marked, that way allowing new meaning to the piece. A variety of alternative experiences happened during the process, which were also integrated in the content. The final moment was determined by the meaning of space and time intrinsic in the word game: LIST or ITS; the first one means activity, the second presence; or essentiality as NON denies the future, and POST confirms it… The game continues because the fairy tales has no end.
Biljana Petrovska Isijanin, Plasy 1999

Biljana Petrovska Isijanin has BA in Art History and Archaeology and a Master Degree in Cultural Studies. As a director of Center for Contemporary Public Arts Elementi, she is researching the relation betweeen the personal and the society, by creating contexts for curatorial concepts and creating artworks. She has curated international exhibitions in Macedonia (most of them happenning outdoors, in public spaces) and one in Yokohama-Japan, as well as many local exhibitions in Macedonia. In the last couple of years she started two international projects: Attitude (Video/ short and experimental films/ photography Festival), and Angle (exhibitions and presentations of contemporary art scenes), in Bitola, Macedonia. She took part in symposia, workshops and exhibitions in Macedonia, Czechia, Netherlands, UK and Italy. She’s a member of AICA from 2006. 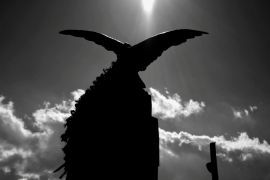 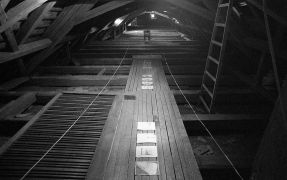