Notes on the work:
The piece is based on the method of representation of a series of typical events and locations which begin to delineate a narrative derived from the genre of „film noir“.
The locations of corridors, stairways, and fire escapes filmed within the setting of the main building of the prelature situate the movement of the film. Using the technique of projecting video footage of a previous scene back onto another part of the space while recording a new scene, a duality is set up between the two levels of the image.
There is the level of the scene that is being filmed, and the level of the scene that has already been recorded and appears as a projected sequence of images on the surface of the space. In outline, the work proceeds through a re-inscription or re-placement of locations and sequences of film back on to and into the space of representation.
The narrative of the „film noir“ as a type is characterized in part by the re-construction of the crime, by the mechanism of elucidation, by the solution or re-solution of an enigma, and work adopts this mechanism as a re-turn a sequence of spaces that are layered over themselves.
The result can be seen as a dislocation of space – re-structuring the filmic sequence as an assembly of fragments in which the edge of the frame comes within the space of the shot, and the actual location of scene becomes ambivalent.

Tony Roch presented a video installation, in which he deconstructs three important spaces of the film noir: the staircase, the office, and the bar. This was done using the Center’s Baroque rooms and staircase. The comment here was on strategic structures of manipulation of the film noir, and the irrelevance of human emotion. 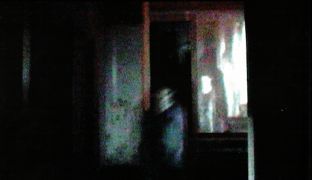