Charlie Citron: In the Disorder of The Cups

In the Disorder of The Cups
By Charlie Citron

On January24, in the year of our Lord 1624, Octavius de Estaban, monk of the Cistercian order at Plasy left his cup to providence on the left side of the windowsill adjoining the hallway to the refectory. The cup filled with the juice of unknown berries transmogrified into of slippery black color. The monks of the order lead by the noted inquisitor Hans de Groot of Limbourg, proclaimed the presence of evil and that the vessel of our Lord had been infested with devil’s own brew. Poor Octavius was lashed to the floor in the chapel and his behind severely beaten until he uttered with great relief the word obligato meaning to oblige.

On June 2, in the year of our Lord 1756, Franco Soleria monk of the Cistercian order at Plasy was working in the pharmacy on an herbal cure for head swelling, when he left his cup by candle which was heating a copper cylinder connected to a glass canister filled with corporeal mundi-fungi, the very same type which was said to have grown on the grave of Saint Amber on the eve of Christmas 1701. The cup having been left with the handle facing the door on the east side of the room, turned 60 degrees to the left by an unknown source. The abbot having been alarmed by the story, purified the cup in a caldron filled with liquorice root and had Franco bend his knees consecutively for 48 hours while turning 60 degrees to the right.

On July 22. 1805, a soldier in Napoleon´s army, said Gendarme Michel de Pascale, having drank an abundance of local beer and having urinated where the horses were stabled by the refectory, left his cup on the field of pastoral grazing. Napoleon´s white horse, being fenced there for the night, also relieved himself at about 300 by moonlight into Michel´s cup. Upon waking in the morning Napoleon having his customary aperitif before engaging in battle, drank the urine of his horse, proclaiming in advance of his march on Moscow La Défense de Culture Françias pour la Liberté, Fraternité Égalité. His horse would soon be eaten on the field of Austerlitz.

On March 11. 1917, there was a knocking at the door at the refectory. Jan Suška had been ill all night, and having drank a glass of herbata tea left his cup on the bed. Upon opening the door, he saw before him the niece of Czar Nicolas the end, recently shot by firing squad. There was a Bolshevik revolution in Russia and the royal highness, being the last progenitor of the czar´s family, was taken to the abbot who offered her sanctuary. Being a monk of special kindness, Jan brought the czar´s niece to his room to offer a brief repast and drink of herbata. The niece being very sleepy fell upon the bed. In the morning a terrible scandal ensued as the abbot and the other monks did not believe that the czarina and Jan had not fondled each other in the night. The cup was used as proof in the inquiry as it was said that a single vessel on a single bed, sat upon by members of the opposite sex, was a sure sign of conjugal union and coitus. Jan was excommunicated and the czarina moved to New Brunswick, NJ.

On Oct 23, 1926, Prince Metternich´s gardener was planting some ouroboros daffodils in the garden at Plasy. His wife Anji brought him a cup of his favorite wine which he drank feverishly in one swallow. There in the courtyard of the old monastery he realized that he, like his wine, was contained within a vessel and could see only to its celestial rim. He realized too that his wife´s body was a vessel for his unborn children and that even the great prince himself was born of the same corporeal form. He saw that the cloister´s walls mirrored the earth and further the Universe. As he absentmindedly ruminated on such thoughts. Prince Metternich himself happened to be strolling by for his afternoon constitutional, seeing the gardener standing stupefied, he walked over briskly and swatted him on the head. „Lazy good for nothing, get to work, he said. The cup he was holding dropped to the floor.

On May 21, 1944, Rudolf Ausbach was sitting in the Granary watchtower at Plasy waiting for arrival of the Russian troops. The war was certainly over and it was only a matter of time before Prague and the surrounding areas were evacuated. A thousand-year Reich, how had it all gone so wrong, he knew that there was a terrible price to pay and that the war would forever be a blemish on his soul. While Rudolf was eating his sausage and drinking his beer, he placed his cup on the wall next to his rifle. Suddenly, he heard a sharp whistling sound. It was a bomb dropping from the sky. Rudolf dove for the floor, but in the resulting blast his cup was shattered into a thousand pieces. Today Rudolf lives on a retirement pension in Oberhausen after working for 20 years in an automotive garage. A shard of his cup sits on his mantle pieces as a reminder of fallen dreams.

On Jan 25, 1948, Vladimir was writing letters to his two sons whom he wrote to every day in Moscow. Dearest André and Yuri, you cannot believe the beautiful smells here in Plasy. It is like the paradise our great Lenin prophesized. Yesterday, I ate real cheese from the farmer and drank the wine from his daughter´s cup. Forgive me to your mother. Your lonely father, I shan´t be coming soon.

On Jan 2, 1965, a Skoda pulled up in front of the main door of the cloister at Plasy. Daniel who was a classical music student out of it, immediately taking his things to the refectory, and going for a walk in the field near the river. It was a mild winter day. He layed down on a bench and dreamed that he was resting in a cabana on a tropical island´s beach. He fantasized that he was totally naked and could feel the warm wind blow against his skin. Suddenly, he felt a sharp abrupt pain on his head and woke up with a start. Someone had thrown a cup from nearby disco filled with winter grog. It was a socialist holiday celebrating the building of new roads in the Czechoslovak Republic. Someone shouted, „No time for sleeping, idiot. Share in your comrades´ accomplishments. Come drink with us.“

On May 11, 1998, Gary was looking for a screwdriver in the workshop of the Center for Metamedia, in Plasy. He and a number of other artists have recently arrived from LA via Berlin. There was Alice who was counting grains of sand with a needle… There was Alexander who was discovered squeezing himself through a barred window one night in the cloister, there was Roni who would dance reciting the Iliad each morning while drinking rum. Redas and Martin were seen that same day trying to climb a waterfall in town without shoes, and Gale and Stephie were doing a hip hop Techno jam in their bedroom. Carol was sitting on the floor rapping a brontosaurus with rubber-bands and Erwin was trying to pass light a tiny circuit. Then there was Dan, who liked to rub things, and Tohsi who was to be seen spinning his vegetables until they disappeared. While Ali pretended, he was Humpty-Dumpty and Alice at the same time, Gary felt a weak spot in the floor. Lifting up the wood he discovered a secret passageway that seemed to lead to space below. On climbing down, he slid into a dropped space and then down to some small staircase finally arriving at a door which lead to a big black space. On lighting a lighter he saw a box which was marked “Lost Cups,“ and another which was marked „Beware.“ On walking further into the space, he came to a corner which contained a drum filled with a liquid of a strange blue color, which was glowing in the dark. Gary noticed that he was also glowing in the dark, covered by a soft florescent light. He thought, „If I could just bring this drum upstairs, I could cover the space in the granary with it and add a small sailboat. It could be called sailing to Byzantium. “

It is Feb 6, the year 2025. The head-chef at the hotel Sheraton, in Plasy, was located in the scenic Bohemian hills, two hours from Prague and one hour from Marienbad. He was standing on the indoor tennis court in the old granary of the Hotel. He had just finished work and was getting some exercise when a bus loaded with Austrian tourists arrived. „This court tis very slippery, “ he said. „I guess it´s the AstroTurf. I suppose it is time for a sauna downstairs, because tomorrow I’ll be busy with Knudels the whole day. Another bus with a tour-group from Japan leaves the convent. After the sauna he went to the bar in the old ballroom in the refectory to have his favorite drink, a Martini Metternich with a squeeze of lemon on the side. He strolled to the marble staircase and walked down to the garden path alongside the river, from where he could see the reflections of the indoor swimming pool from a distance.
He walked slowly into town which had an assortment of posh café and shops. He stopped in front of a china store, called La Boheme, to look at some tea set made of fine porcelain. The cups, all had the insignia of the pyramid and the eye of Horace on the bottom, just like the one over the cloister. He knew it was The symbol of the masonic order, the all seeing eye of Horace spanning history from ancient Egypt to the medieval knights Templar and The Habsburg´s monarchy. The great monastic complex at Plasy settled on the top of the old Cistercian foundations, with the water continually running through it. As he walked, he thought how beautiful the mist was rising majestically over the lake, it was a middle European scene to be sure. He walked slowly to his room, forgetting completely about the time. The shadows of the trees cascades eerily on the old granary walls. He could feel the mathematics and proportions of the place as if the building were vibrating with some unknown resonance. He felt somehow very alone, as if his life and memory was slowly being turned and weighed against the past. But what past, and whose history. He felt weightless as if the whole compound was lifted off the ground and was disappearing in the blue evening light. „Its very romantic, “ he thought, „like a fairy tale. But I feel so disoriented, so emotional. I haven´t felt like this year. “ He went back inside the main door of the Hotel, took elevator to the 21st floor. He was in room 2111. He could see the cross and serpent on the roof of the cloister below his window. He layed down on his bed an ordered a cup of herbal tea from room service. „What a relaxing place,“ he thought, „I think I´ll book a weekend next year. “ 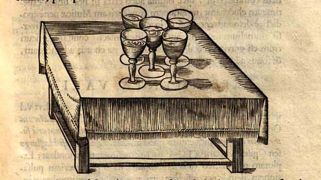