Oresteia Images was a performance and art show staged at the Hermit Foundation, Plasy, Czech Republic, where Julie Newdoll and Belinda Van Valkenburg were awarded a residency in 1998. Newdoll created paintings, photographs and sculptures inspired by the subject of Necrobiology as it relates to Greek Tragedy. These were combined with paintings and photographs by Belinda Van Valkenburg, who incorporated the concepts of time and direction into the piece. A score was written and recorded by Newdoll, van Valkenburg, Craig and Misha Birnie and Charles Granich. During the performance, over 100 images were back-projected onto a screen while the music played and live performers acted out scenes from Aeschylus' play "Oresteia" in front of and behind the screen.

This is a shared proposal by two artists, exploring the symbiosis of dreams, color and tragedy. We propose to create a dream like environment built with colors in which to perform an adaptation of a
tragic play. The space will contain colors and textures from the local environment. We will make costumes for the characters in the play. We will also create paintings of these characters in their dreamlike environment. The culminating event will be a five-day theatrical festival, modelled after that which took place in ancient Greece during the times when tragedy was born. The god Dionysus is the god of artistic inspiration. He represents a “drunken” or dreamlike state during which divine inspiration can occur. In the words of Nietzsche, “The beautiful illusion of the dream worlds in the creation of which man is a consummate artist, is the precondition of all visual art“1.
Our study of tragedy was initially based on the research of a paper on Necro biology, the study of cell death2. The different types of cell death are reminiscent of characters in a tragic play, they commit suicide, are sometimes murdered, or are fated to a “programmed cell death” after a predetermined number of divisions.
The Greek festival celebrating Dionysus was their most happy celebration. No human sacrifices or priestly ceremonies, only plays by the finest poets and writers of the day. These plays were tragic because the cycle of the life of Dionysus is tragic. Each year he dies a brutal death, torn limb from limb like the pruning of a grape vine. He is reborn every spring3. The bowerbird shows interesting parallels and makes a good foundation for creating an environment in which to have a dreamlike, tragic performance. The bowerbird always builds his bower in a North-South direction. He lines his nest and the area with colored objects he collects. “…it has been suggested that the construction of a “bower” is not entirely governed by a sexual stimulus, but is a kind of play which might even be described as pre-aesthetic”4. The box, you will find enclosed, has on its top compass. On the side are writings from Abbot Eugen Tyttl5. We have already begun our artistic journey to Plasy. We need a space rich with history and memories, circular structures representing the cycle of life, in which to realize our vision. Included in this folder are images of the various stages of cell death2.
These are patterns we will incorporate into the costumes we will make for the characters in the play. There is also an image of the bower bird4, and the Greek theater in which the original tragic plays were held6. This theater would perhaps be in the courtyard of the monastery, as the Greek plays were held outdoors. It would be important to have an indoor environment as well, for the reflection on the cave wall of our dreamworld. Cells, DNA, the history of all thought and our ancestors, intermingled with an experience of the senses.

II. What will we do?
Collect local colors, textures, spices, aromas, music. Create costumes for the characters in the play. Paint characters and themes relating to tragedy, color and direction.  Build elements of our theater
Hold a performance of an adaptation of “The Agamemnon” by Aeschylus.
III. Requirements
A place to paint. A room for the installation and the performance
A room for the installations
A sewing machine, if possible.
In addition, we will be searching the local area for various objects, colors, and fabrics. We will also be buying or building stretcher bars for painting on. We can bring some of our own, but we would
prefer to mail them ahead if that is necessary. Please advise us as to the availability of canvas and other painting materials.

Julie Newdoll has been painting in oils since 1976. Torn between art and science in college, she ended up with a degree in Microbiology, and a minor in arBelinda Van Valkenburg and Julie Newdoll, 1997t. Following this, she received a masters in Medical Illustration. The world of microscopic images and molecules first appeared in her artwork in 1990, while she was employed as a scientific visualization specialist at the University of California at San Francisco. Following this experience, she spent a few years as the Supervising Technical Director at Tippett Studio, directing the lighting for the special effects in films such as Starship Troopers. Currently, she is pursuing art full time in her company "Brush with Science".

Belinda Van Valkenburg (born 1967), is a dutch painter. Education: Art Acadamy of Amersfoort in Holland, painting and sculpting 1985-87, San Francisco Citz College, California, photography and industrial design. She started her animation career in 1994 at Tippett Studios in Berkeley CA. She was trained artistically, as weel as technically in texturing, lighting and compositing. In 1999 she také the position of 3D Art director at Artmedia Babelsberg Berlin in Germany. Than she was the Art Director for the  Pixar Canada. In the Summer of 2014 to start her own consulting and design company. She is currently working from the San Francisco and Amsterdam, where she was born and raised. 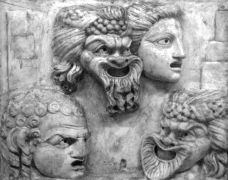 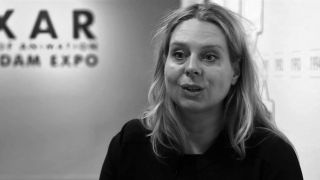 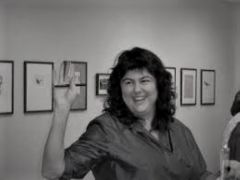