The main focus of the work of Richard Fajnor includes topics such as the role of an artist in society, the analysis of institutional operations, and the artist’s self-reflexion of his/her individuality. It is not easy to categorize this artist who is knowledgeable and draws from art lessons of the 1960s. His work encompasses the entire spectrum of media and processes – from land art realizations through live performances and installations, all the way to work with video and multimedia. Although his work was an integral part of the Czechoslovak fine art scene from the beginning of the 1990s, it is not distinguished by great quantity. Fajnor belongs among the type of artists who create from the need to deal with specific topics, or from the necessity to react to their own life situations and turning points. Instead of continuity, his work shows rather the cyclical, discoveries and burrowing, as well as discreet presence within artistic production, which he from time to time makes visible through a thematically and formally directed act.

We could classify his performance Registrujete svoje partnerství? (Have you registered your civil union?, 2006) in the sphere of work inspired by the need to comment on current events.  Here he reacts to a sharp discussion about the civil union of same sex couples through an action, very much in the spirit of 1970s body art. In this work, the artist becomes a “bride turned inside out” in the symbolic as well as literal senses when he hangs from the ceiling upside down in the gallery space wearing a wedding gown turned inside out. In contrast, one of his long-term projects includes the action from the series Hang art (2004–) or Poorperformance (2000–). In the first one, he shifts attention from the art object to the artist by including a performer in the gallery, himself hanging on the wall between the exhibits. This latter long-term project is a parody of the position of an artist within the scope of economical mechanisms. He transforms himself into the role of a beggar sitting on the street. He motivates the passers-by to give him a donation with a sign that reads, “Please contribute to my exhibition.”

Fajnor’s action Jezdecká socha (Equestrian Statue, 1999) also relates to the modelling of a performance situation in the public space – taking into consideration his geographic and historical command. The artist sits in an old Skoda for one full day on a square in the Slovak town of Senica, scanning the horizon in front of him through a pair of binoculars. This action, similar to his installation Dočasná davová trombóza (Temporary Crowd Thrombosis, 1998), in which he blocked a street passage with tree trunks in order to alter the normal movement through town, took place as a part of the theatre festival in Senica, in which Fajnor has repeatedly participated. We can consider experimental theatre as another one of his creative resources, perhaps also thanks to the overlap with rituals in his work with the human body and its spiritual and energetic potential.

In creative work that reacts to his own life situations, Fajnor created the action XXXIII/Kristovy roky II (XXXIII/Christ’s Years II, 1999). The artist remained locked inside a wooden casket for 33 hours. During this time he shaved his entire body, cut his hair and communicated with potential interested persons from the outside via closed-circuit camera. The performances me made devoted to his father when he found out about his unexpected death also took on a personal tone.

No matter in which direction Fajnor’s attention is turned, it is always done through a clearly articulated gesture. On the one hand, this is an intense communication with the viewer, while on the other, the artist cunningly tests himself – both within the scope of individual relationships, as well as in the area of broader systems – whether this means artistic operations, the law, public space, or for example interpersonal behaviour of individuals within a certain society.

Richard Fajnor was born 1965. He is a performance and video artist. He studied art education and psychology at the University of Nitra (1989-1994). Since 1994, Fajnor teaches at the VUT in Brno, and has acted as head of MultiMedia FaVU VUT Brno department. From 1996 to 2000, he organized the anual  ...Medzi...  art symposiums in Skalica. Fajnor also founded the CEICA initiative. He lives in Brno. 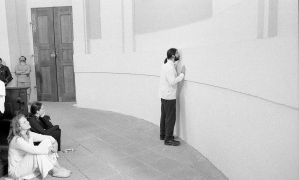 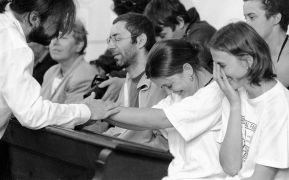 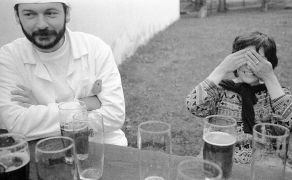 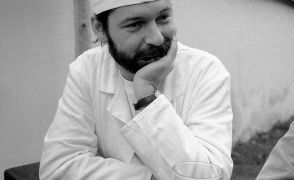