The symmetrical architecture of the Plasy baroque baarn inspired me to make an installation where I connected the interior with the exterior. The space of approximatelly 35 m deep was visualy multiplied by mounting large mirrors on the rear wall of the room. Then I connected the opposite windows with paper vents, which guided the light and air from outside into the large room. The title of the work came up when I saw how the vents moved being inflated by wind and created sort of feeling of breathing lungs of the granary.
Anton Čierny

He was interested in the creation of intermediate overlaps, understanding the statue as an artifact in the landscape (land art), as an intervention in architecture (art in public space), and for various gallery or non-gallery spaces in Bohemia and Slovakia he created site- specific installations.
He has had a number of solo and group exhibitions, is a member of art juries, works as a curator and publishes. He has been working in public space since 2000.

A video became the dominant medium in the work of Professor Čierny. Overall, his works are intermedia and interactive. His work is also characterized by his relationship to society, its political, historical and cultural identity. 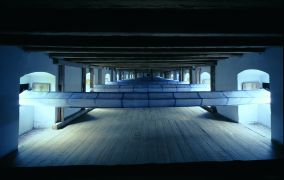 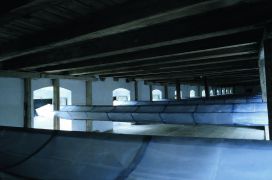 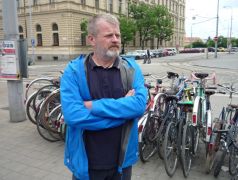