Vladimír Škoda was born in 1942 in Prague. He was trained as a turner-miller, later he studied drawing and was also interested in painting. In 1968 he left to France, he gave up painting and began to be interested in sculpture. He studied at École des Arts Décoratifs in Grenoble and later in César’s atelier at École National Supérieure des Beaux-Arts in Paris. From 1973 to 1975 he operated in Rome in Villa Medici where he created the series of sculpture made of the iron wire. Since 1975 he started to create his first work pieces in a smithy that resulted into the creation of the monumental sculpture in late seventies. After his first solo exhibitions in the gallery Primo Piano in Roma, in the gallery BLU in Milan (1975) and in the gallery Ilanne in Paris (1977) Vladimír Škoda created the monumental piece of art Horizontal - vertical for the symposium Situation 1 in Regensburg in 1979 and then he began to exhibit in Europe.

After the solo exhibition in Musée d’Art Moderne in Paris (City of Paris’ Museum of Modern Art) in 1987, where he presented the series of the forged balls called de l’intérieur, the perfect sphere appeared in his work after long practise as a smith in 1988. The mass needed for processing and forming needs to be heated up to the white colour in the furnace. Such mass - the energy waken up in the steel by the heat prevented Vladimír Škoda from seeing the exact form of the created piece of art and the development of his work then gradually came to the spherical form. He started to fit the interior of the steel spheres with other metals for example with copper and using grooving and polishing he shaped their surface. The black tarnish absorbing light and immersing it into itself passes through the smooth surface to the perfect sphere with the mirror surface that reflects and transmits back to us the image of the changed outside world. The first spherical sculptures with the mirror surface were created by Vladimír Škoda in 1991 and one year later he presented them within the authorial exhibition in Moulins Albigeois in Albi in the south of France.

In 1994 Vladimír Škoda was inspired by the motion of the pendulum and in 1995 he presented his first piece of art on this topic called Hommage à Foucault (Honour to Foucault) within the exhibition Constellations in the Gallery Rudolfinum in Prague. The installation Kora dated 1995-1996 presented the best the dynamics and technique of the pendulum’s motion. There we could see for the first time the use of the polished concave mirror that was created by polishing the inside of the sphere. In 1999 his piece of art badria on the topic of pendulum was presented at the exhibition Cosmos: du romantisme à l’avant-garde in Musée des Beaux-Arts in Montréal and the other pendulum sculpture were presented at the exhibition Riflessi celesti e meccaniche galileane in Pisa in 2004 under the curatorial leadership of Miroslava Hájek.

Later on Vladimír Škoda was inspired by the vibrating and rotating motion of the mirror where he was able to obtain the vision of infinity in motion beside the distorted image of the surrounding. The important aspect of this issue presents the series of vibrating and turning mirrors Miroir du temps (Time mirror) being produced from 1999 and introduced in 2006 at the exhibition Specchio del tempo in Spoleto, Italy and in 2007 at the exhibition Fourth dimension in Veletržní palác of the National Gallery in Prague.

In 2013 Vladimír Škoda launched the exhibition in Espace d’art contemporain André Malraux in Colmar the series of the exhibitions in France, Germany and in the Czech Republic. The entire series is accompanied by a monograph called de l’intérieur (from the inside), which offered an overview of the artist’s work from the nineties to the present time.

When working with metals, Vladimír Škoda uses different processes and technologies such as the interference, magnetism, polarity and lighting configurations. During his long carrier he has worked as a professor at École National Supérieure des Beaux-Arts in Le Havre and in Marseille, later at École des Arts Décoratifs in Strasbourg. His work is represented in collections, for example in Centre Pompidou and Musée d’Art Moderne in Paris, the National Gallery in Prague and Central Bohemian Gallery in Kutná Hora (GASK) and Gemaldegalerie Neue Meister in Dresden, as well as in many public and private collections in France, Belgium, Germany and the Czech Republic. 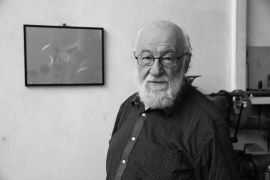 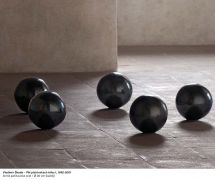