Tim Hodgkinson performed as a duo with Jim Meneses and in the evening of the last day of the Entarctic Shelf Festival he improvised solo in the acousticaly extraordinary Saint Benedict chappel. Entire concert was recorded by Jiří Sláma from AVIK studio.

Tim Hodgkinson (b. 1949) studied social anthropology at Cambridge, and co-founded the politically and musically radical group HENRY COW with Fred Frith in 1968. In addition to composing, he has a long involvement in improvisation, and came back to anthropology in the 1990’s with research into music and shamanism in Siberia. He has participated in many concerts with Iancu Dumitrescu’s Hyperion Ensemble both as bass clarinetist and composer and conductor. His compositions have been interpreted in such international festivals as: Spectrum XXI (Brussels, Paris, Geneva, Berlin, London), Huddersfield Contemporary Music Festival (U.K.) where he was a featured composer in 2007, Craiova and Ploiesti Festivals (Romania), Guarda Festival (Portugal), Cantiere Internazionale d’Arte di Montepulciano (Italy), Konfrontationen Festival (Austria), Nordlyd Festival (Norway), Musique Action (France), Meridian Crossings (Czech Republic) and the European Symposium of Experimental Music at Barcelona.

As an improvising musician on reeds and lap steel guitar Tim Hodgkinson has performed all over the world with many of the most acclaimed artists in the field, and continues to be fully engaged in the celebrated Konk Pack trio with Roger Turner and Thomas Lehn. In 2009 he released KLARNT, a CD of solo clarinet improvisations.

With Ken Hyder, and Gendos Chamzyryn from Tuva, he works in the K-Space project: numerous tours of Europe and Siberia and CD releases - including Infinity, a set of recordings that uses customised software to re-compose the music with each listening. In 2009, K-Space developed a sound-installation for the exhibition Shamans of Siberia at the Museum of Ethnology in Stuttgart.

As a writer, he has published articles and reviews on improvised music, musique concrète, spectralism, the ethnomusicology of shamanism, and the aesthetic problems of the impact of new technology on contemporary music in, among others, Perspectives of New Music, Arcana, Contemporary Music Review, Musicworks, The Wire, Cambridge Anthropology, Variant, Rer Quarterly, and Resonance Magazine. His book Music and the Myth of Wholeness will be published by MIT Press in January 2016.

He has given lectures, workshops and seminars at Cagliari and Lyon Conservatoires, at the Institute of Contemporary Art, at Goldsmiths College and the School of Oriental and African Studies in London, at Istanbul, Edinburgh and Cornell Universities, and art schools in several European countries, at COMA summer school, and at the Verband für Aktuelle Musik in Hamburg where he was artist in residence in 2010.

Hodgkinsons’s travel to Plasy was kindly supported by The British Council Prague. 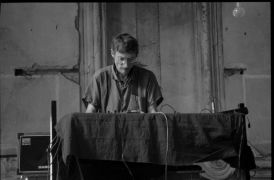 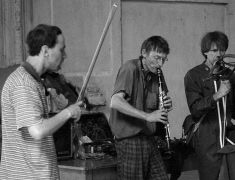